Lemonodor
A mostly Lisp weblog by John Wiseman
All About Timing 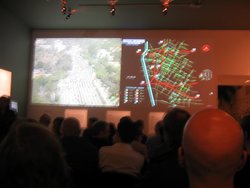 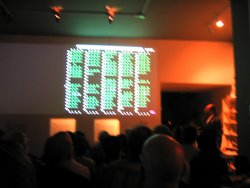 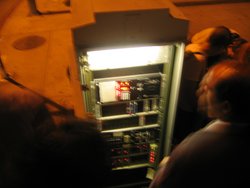 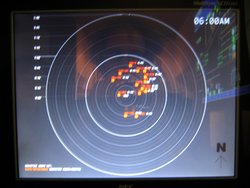 Last night at the Center for Land Use Interpretation, Steve Rostam from the Automated Traffic Surveillance and Control Center (ATSAC) gave a talk on traffic management technology used in the LA area.

ATSAC is located four levels below city hall in a cold-war era complex complete with heavy swinging steel doors (“Our biggest worry is getting trapped down there if something goes wrong”). It monitors 3200 of the 4500 intersections that have traffic signals, using inductive loops and video cameras, and tries to keep traffic moving smoothly. Software written by ATSAC programmers, including an expert system, processes the data and responds by modifying signal cycle times and offsets, which they call “adaptive traffic control”.

A few points I thought were interesting:

Mr. Rostam was obviously an expert and very engaged in his work, repeatedly slipping into acronymic jargon as he answered audience questions. And the audience did ask a lot of questions. “Why did you guys remove a lane at Motor and Pico? It's awful there now!” “Some people in that neighborhood really wanted to get rid of that lane, and that's their right. We ran simulations and we knew it was going to be a bad situation, but they wanted to do it anyway. Now they can't even get into their own neighborhood.”

I asked if there were any data he wished they could get and whether there were any additional actions he wished they could take to affect traffic patterns. I was a little disappointed; it seemed like something he hadn't thought about. When I asked how much room for improvement there was in the system, like, if we had God's traffic control algorithm how much faster could traffic be moving, he didn't really have an answer for that either. Oh well.

After the talk we went outside where Mr. Rostam opened up a traffic control box and showed us its guts, which was kind of neat. Precise, clean electronics inside a banged up, graffiti'd and many-times-overpainted metal box.

I heard a story, two or three years back, about how they were experimenting with putting radio transponders in busses in L.A., so that intersections would stay keep from going red for just a second or two longer so the bus could get through. In my memory, this shaved almost a third off the transit time.

This is a paper about giving busses that are behind schedule priority at intersections. They don't use radio transponders here, but your inductive loop detectors, because of reliability.

The ATSAC guy did talk a little about bus-related sensing and control, and he had a bus transponder for us to look at. I know we also saw some photos of special loops cut specifically for buses.

The LA Weekly has an article[1] on the CLUI exhibit. It includes this story, which I assume is apocryphal:

"Stuck on the 405 southbound at 5:15, you might find it hard to believe that all this technology is doing anything, but Patel tells a story of an incident 15 years ago when a disgruntled councilman questioned the systems efficacy. ATSAC simply turned off all its monitoring and control apparatus and left the lights on their default settings. In a matter of hours, the councilman was begging them to turn the system back on."