Max-Gerd Retzlaff has been hacking on Dan Barlow's PowerPoint-style presentation software, Acclaim. The new features include line wrapping and support for background images.

Here is an example of the little Acclaim language for describing presentations:

And here's the resulting slide: 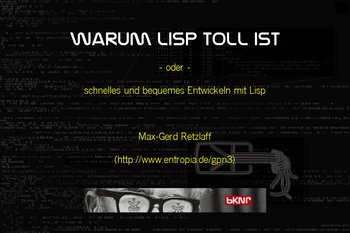 I recently came up with a PowerPoint presentation as part of “ERSP U”, the training program that Evolution offers to people using our software. 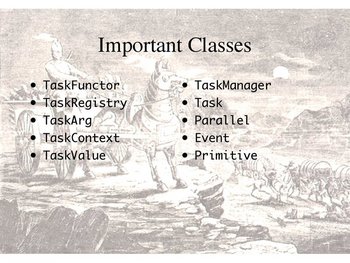 I bought Edward Tufte's PowerPoint essay hoping to find some ideas on how to create a presentation that wouldn't actually make students stupider by the very act of viewing it, and just generally not be so awful as to be worth a meticulous dissection in a Tufte essay. Unfortunately “The Cognitive Style of PowerPoint” offers more of an opportunity to feel superior if you haven't used PowerPoint than helpful advice if you want to use it. 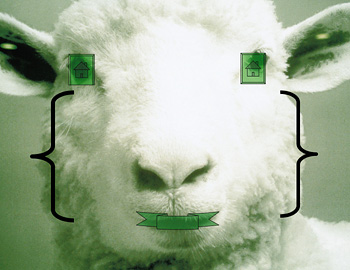 Doesn't Tufte understand we're past hating, and now it's time to co-opt? I do wonder what software designed from the start to discourage jaggy low-res bright-yellow-text-on-dark-blue-background presentations would look like.

Why Tufte be hatin on Powerpoint? Nobody can pop they butt like David Byrne and Beyonce.

Having gone to one of his courses, one of the reasons Tufte hasn't gone beyond hating is that he thinks that there are some cases where Powerpoint is just the wrong tool. A big hobbyhorse he has is how low-res a Powerpoint presentation is versus a full-sized piece of paper with real print on it, meant to be read from close-up.

For example, consider what you could do with an 8 1/2 x 11 sheet of 12 pt paper to substitute for your slide on "Important Classes." You could have a LaTeX-style description environment with a world of information about each of the important classes, instead of just the name!

We see a funny thing when people have only PowerPoint as their information presentation tool. We often get very, very complex slides, crowded with images, etc., that can only be read off-line, and are completely unsuited for presentation (although their authors sometimes don't realize this!). At this point we see Tufte's argument sorta win, and PowerPoint is co-opted for a new purpose. Not entirely a win, though, since people will insist on slogging through these things in front of an audience.

I too bought Tufte's essay hoping for advice. While I appreciate and agree with RG's point, the fact is that PowerPoint is now de rigueur in many many areas. Even academics, who should approve of Tufte's information density arguments, are shifting to PP (or something similar). I can't even imagine the reaction I'd get if I showed up to my next conference with a single page handout and no slides. (Doesn't mean I won't try it, though.)

We definitely need better instruction and ideas on using PowerPoint, perhaps merely as a supplement to a good handout. Maybe someone besides Tufte should write it, so he can retain his extremist position (which is actually very useful).

Perhaps this will sound a little bit schizophrenic as I spent quite some time programming Acclaim but I actually hate presentation programs. Too often they are misused. Let me put it in a provocative from: A good slide set is completely useless to understand the speech's topic. Speech means "spoken words", and look at the average Powerpoint 'speech': The main points are put on the wall as big bullet boxes and the speaker just tries to mention each of them, barely using full sentences. This has nothing in common with rhetorics!

Of course you need sometimes to present some tabulars, graphics, or (short) code examples, especially in a technical speech. For this -- and only for this -- you should use the presentation program. The documentation should be a completely different thing using full formulated sentences. The idea that if you write down everything you want to mention so that the slides are usefull for people who cannot attend your speech is a bad one in my humble opinion, leading to bad slides that consume too much attention of the audience.

Last week Lawrence Lessig was at the University of Karslruhe in Germany[1], and he did a brilliant "performance" about "Free Culture", using his presentation program as an expressive medium. He used many slides _per spoken sentence_! Thus his slides were like markers for the important words (think of a cartoon figure whose thoughts are visible as written words over its head). The time was just enough to read the word at the same time as he spoke them. Perhaps this sounds a little bit scary at first but trust me it was really great. And it did made his speech more expressive and impressive. In my opinion that was a good use of a presentation program, and it was also very refreshing. (Not to mention that I also liked the content the of his speech.)

Okay, perhaps the above mentioned is a little bit too black and white. Especially if the speaker is not (yet) used to give speeches, more verbose slides are quite nice. And the same is true if I am a little bit tired or just not very interested in the topic: When you are not listening to every word of the speech it is nice that you have some moments left to read the slide in order to get at least to know some notes of what he just mentioned. On the other hand, as I already have mentioned, if the speaker has the urge to stick to every word he or she had written on the slides these slide themselves can actually cause the tediousness.

And now imagine the speaker might even feel the urge to present cool looking slides consisting of a dark background picture combined with low-res bright-yellow text! :}