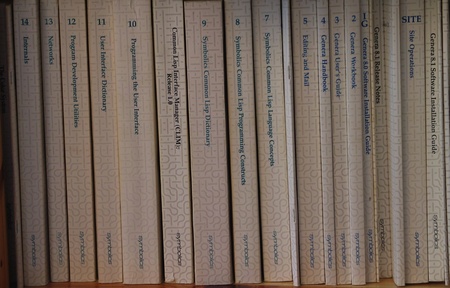 Rainer Joswig: “The Symbolics manuals are really cool. Everybody should have a copy.”

The Symbolics manuals are really cool. Everybody should have a copy.: Please, do not distract newbies with bullshit like this. If there is something to be learned from these manuals, make it explicit. There IS a better way to learn LISP than buying obsolote machinery.

Frankly, I'm tired of hearing about Symbolics and Genera. And I'm tired of the type of reasoning that goes on in comp.lang.lisp. It's like the whole Lisp (CL, of course.. the One True Lisp, blah blah) community is stuck in a timewarp. Like their precious Common Lisp would crumble to the ground with a single update to the spec. God forbid someone try to take away their "loop" procedure.

Anyhow.. it's 2004 and Symbolics is still dead. I'm afraid people who cared have moved on too. Maybe, just maybe, we can get some more forward-thinking people like Paul Graham. It would be tragic otherwise.

Well what one can learn from it is at least to distribute a decent printed documentation. No online documention is not a replacement for a well written documentation

Now what I especially dislike about the documentation is that is's lacking continous examples. You can probally learn a lot about the implemented Lisp and all kind of services but you must dig through examples code and do not have any clue why things are done in a separate way.

Did Symbolics bite you as a child? I think it'd be awesome to have printed Symbolcs manuals. A bunch of smart hackers solved a bunch of practical problems in developing the system, and it'd be neat to see some of the documentation for it.

It's only "awesome" to have these manuals if you want to go out and brag about having them. It seems some people are still in high school.

No one is going to be learning anything from these manuals because Symbolics is DEAD. Genera is DEAD. And honestly, CL is too.

There is nothing practical about the problems Symbolics engineers faced when writing software for expensive proprietary Lisp Machines.

Some people come to forums to contribute, others simply to argue. What really is the point in this 'Lisp is dead' diatribe? Do you merely have an axe to grind, or something to add?

For what it's worth, my Unix shell account also runs Symbolics Genera, on Alpha hardware. During the first Gulf War I'm told Symbolics machines were used by the US military (not sure if they're still in use now tho').

Where exactly is *your* contribution? What really is the point in talking about an old dead system? I wouldn't have an axe to grind if this was a one time nostalgic mention of the system. But what this is, is a persistent beating of a dead horse. Genera/Symbolics is mentioned at least once a week on comp.lang.lisp.

No one cares if Symbolics were used by the military more than a decade ago. It runs on your Alpha? Good job. Genera running on yet another dead system.

Enough about how grand Genera was. It is no more.

If it's so dead, why do you have to go on about the fact so?

I think you protest a bit too much.

(And from what I've heard, those who still have access to Symbolics systems are very happy that they do.)

Now rock on with your anonymous trolling bad self.

(Lest there be any confusion from the above, it's not my Alpha system running OpenGenera, I just have a Unix shell account on it.)

Calling someone a troll is just another way to admit you lost an argument and don't have anything substantial to say. As for me protesting? You seem to have an axe to grind about anyone who speaks out against Symbolics. Continue living in the past. I choose to live in 2004.

I think the right thing to say now is: "Don't feed the troll!"

If Symbolics is so dead, why has their website been turned on again this year, and why are they still selling Ivory hardware and Open Genera software? Where are the rumors of a new Open Genera VM for the Mac coming from? For that matter, why are we all here arguing about it?

The fact is that Genera is a very interesting software environment, and the manuals are very well written manuscripts on constructing software systems. I've only read parts of the Symbolics manuals (from grainy PDF scans, alas), but I found a surprising wealth of information about practical memory management, multi-processing, data structure, and graphic display implementation strategies. Interspersed is general knowledge on how to structure a large software system. I also particularly liked the TI Explorer manuals - the examples are very well written in a pleasant Lisp style, and the manuals themselves are handsomely typeset.

Very few people complain about how outdated and irrelevant Greek philosophy and post-Medieval literature are. Those that do are ridiculed for their lack of insight and appreciation. Those that persist seem to have too much time on their hands and too little happening between the ears. You sir are also particularly obnoxious.

You can insult me all day Vladimir. That doesn't change the fact that 1.) I have read the Symbolics manuals 2.) They are almost entirely irrelevant to today's programming (which isn't what I was arguing in the first place, but you went there) and 3.) This entire thread is about some guy bragging about owning the manuals.

The only point to owning them is because of the rarity of the books and how cool it might seem to other Common Lisp people. Just look at this thread. There is no information more than "Hey guys, look at me, I own Symbolics manuals!"

My point is that the CL community (which considers itself the only "Lisp") is stuck in a rut. In a few more days someone will yet again bring up Genera or Symbolics and about how darned cool it was (which is why owning Symbolics-related stuff is cool). It's been happening for countless years.

Anyhow, I'm done here. I'm not going to continue on this blog. Insulting me seems to be more important than reading what I'm actually saying.

A lot of us are hungry for criticisms of the old systems. And of CL itself. But you've offered us nothing so far. Why not substantiate your claims?

By your own admission, these ancient systems are mentioned only once a week on usenet. I'm sure you'll hear about Cello much more than that. Then John Wiseman decides to make some cute visual blog entry featuring some bookshelf, which neither he nor the orginal guy wrote more than a sentence about, and here you are complaining about how the "entire thread" is about some arrogant guy with a bookshelf. Well, you're the guy who started the thread!

Shit, we hear about ISLISP, Arc, how Interlisp got screwed by CL standardization... I'm gonna bet that after I took the couple minutes to type this out, you're not going to provide a single bit of info that will make me go, "Huh, interesting." But this is my version of the lotto.

As I said, I'm not going to continue this here on the web log. I have nothing against John or Rainer. I was using that sentence to prove a point (namely, people think "Symbolics is cool" because ...).