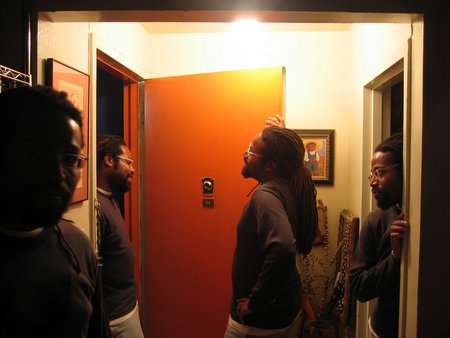 Richard Dawkins on the evolution of the eye:

Creationism has enduring appeal, and the reason is not far to seek. It is not, at least for most of the people I encounter, because of a commitment to the literal truth of Genesis or some other tribal origin story. Rather, it is that people discover for themselves the beauty and complexity of the living world and conclude that it “obviously” must have been designed. Those creationists who recognise that Darwinian evolution provides at least some sort of alternative to their scriptural theory often resort to a slightly more sophisticated objection. They deny the possibility of evolutionary intermediates. “X must have been designed by a Creator,” people say, “because half an X would not work at all. All the parts of X must have been put together simultaneously; they could not have evolved gradually.”

Thus the creationist's favourite question “What is the use of half an eye?” Actually, this is a lightweight question, a doddle to answer. Half an eye is just 1 per cent better than 49 per cent of an eye, which is already better than 48 per cent, and the difference is significant. A more ponderous show of weight seems to lie behind the inevitable supplementary: “Speaking as a physicist, I cannot believe that there has been enough time for an organ as complicated as the eye to have evolved from nothing. Do you really think there has been enough time?” Both questions stem from the Argument from Personal Incredulity. Audiences nevertheless appreciate an answer, and I have usually fallen back on the sheer magnitude of geological time.

It now appears that the shattering enormity of geological time is a steam hammer to crack a peanut. A recent study by a pair of Swedish scientists, Dan Nilson and Susanne Pelger, suggests that a ludicrously small fraction of that time would have been plenty. When one says “the” eye, by the way, one implicitly means the vertebrate eye, but serviceable image-forming eyes have evolved between 40 and 60 times, independently from scratch, in many different invertebrate groups. Among these 40-plus independent evolutions, at least nine distinct design principles have been discovered, including pinhole eyes, two kinds of camera-lens eyes, curved-reflector (“satellite dish”) eyes, and several kinds of compound eyes. Nilsson and Pelger have concentrated on camera eyes with lenses, such as are well developed in vertebrates and octopuses.

It never hurts to be accurate.

It's also worth noting that the octopus eye, in a startling example of convergent evolution, is nearly identicaly optically to the human eye. It's just the best solution to that particular problem. (Eagles have a different problem.)

Actually, octopus eyes are even better than ours, because they don't have blind spots! It's because the optic nerve in octopuses' eyes attaches to the back surface of the retina, not the front like ours do.

Apparently, the 'blood vessels in front' solution that the human eye takes is very good as a heat sink, to protect and nourish the delicate human retina in the much more varied on-land climates humands deal with, vs. octopi. Design tradeoffs, and such.

As ever I am amazed and a bit spooked to hear such otherwise apparently sane people justifying such religious daftnesses. What puzzles me is just what is the inner motivation (beyond Genisis whatnot) for these people to contort their heads like this, let alone evangelise it. Presumably they feel threatened or insecure in some way. Is there any chance that they would feel better if everyone went along with whatever combative illogical arguments they come up with. Think I'll write some lisp ( ... oops that form is incomplete - no closing bracket, so the whole can never come into existence, so there's no point writing it. unwind-protect eye-stuff my-bible-rules. The "Personal Incredulity" combat technique is a bit of a low blow. Neat eye analogy.

As usual, the evolutionist didn't sufficiently respond to the argument(s) about the complexity of the eye and how all of the complex components would have to evolve simultaneously for the eye to be useful at all. He - as with most evolutionists - uses some of the same old tactics: state "facts" that are nothing of the sort or reach conlusions that seem to point to the exact opposite of what he believes. (At least he's willing to respond to creationists' arguments, whereas most evolutionary scientists would dismiss them out-of-hand.)

Interesting, amusing but technically accurate debunks of both Dawkins and Darwin are found on www.CreationFoundation.co.uk

Yes of course those who live mainly by their instincs, by which I mean people who choose to take a religious view of things, on looking at the the natural world these individuals will seek to upgrade or invent some article of faith to support that laid down by dogma - good luck to them. But to truly seek the answers to fundamental questions of provenance we must dare to imagine that things are as they are because they have evolved that way through geological time. Eyes evolved like every other part of the body and there are many other questions too that must be answered.