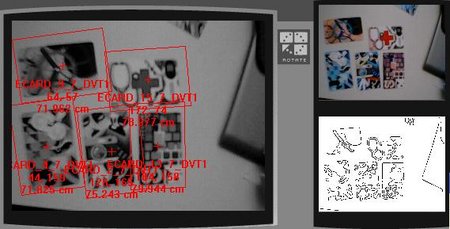 An Aibo hacker posts information on the Evolution vision software used by the robot dogs.

When used in AIBO, there are 3 pattern databases containing:

There also appear to be 3 additional databases, I believe for installable games.

You should already be familiar with the many cool features of AIBO using the cards, and finding the poll. The behavior related to the remembered local scenes appears to be rather limited. In future if a hypothetical RCODE release supports custom visual patterns, this could be used for much more.

Here I'll focus on the basic technology used to detect such things as the AIBO cards.