Lemonodor
A mostly Lisp weblog by John Wiseman
Mr. Shrimp Eats Too Much 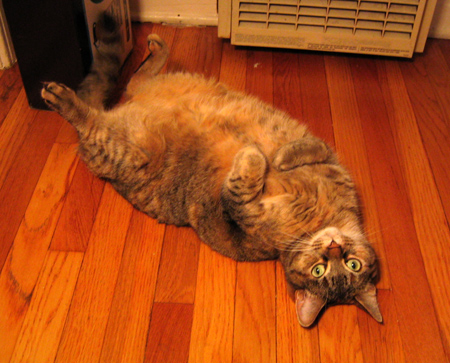 Mr. Shrimp seems to have eaten something that he shouldn't have, something that got stuck in his intestine (Dan: no, it's not Petunia). Lori and I are preemptively feeling guilty for whatever the suspicious blob on the X-ray turns out to be, the thing that we let him eat because we aren't conscientious enough as pet owners, which I'm sure is an earplug and she's sure is yarn. Petunia is just plain weirded out by not having Shrimp around.

In any case, we'll find out what the suspect device is in the next couple hours as Mr. Shrimp is going under the knife. Luckily Shrimp is strong like horse, bullheaded, young and healthy, so I'm not too worried. When I asked about the risk associated with surgery, the vet said he does it all the time. “It's as dangerous as driving on the freeway”. I bet he's exactly right, but somehow I wish he hadn't said that in the context of being smack dab in the middle of LA.

Update: Mr. Shrimp is fine. We still can't figure out what the blocker thing is.

My vote is for the earplug.

And I'd suggest you wash it off before using it again.

As a fellow feline caregiver, I feel your pain. Hope Mr. S is ok.