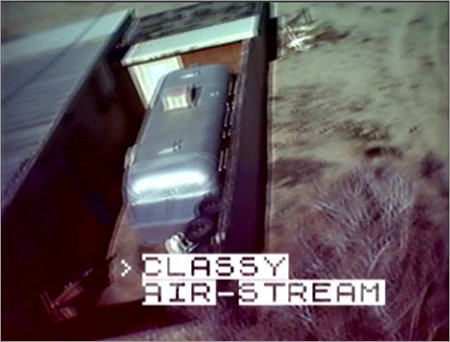 Freedom Flies is a peaceful UAV project by Chris Csikszentmihalyi.

While nearly all UAVs are developed and marketed for military applications, Freedom Flies is targeted for use by journalists, and is the logical extension of the 2001 Afghan Explorer research project. Test flights were conducted on the US / Mexico border, looking for evidence of anti-immigrant groups that are known to promulgate unlawful violence against political and economic refugees there.

While much has been made of using UAVs for “border security,” we believe the systems may also be used to keep our homeland safe by observing and reporting illegal proto-fascist activities. We will be open-sourcing both hardware and software designs for Freedom Flies so that indy media and non-profit groups can rebuild the system. Pictured is the system (crashing!) at the Center for Land Use Interpretation's proving ground near Hinkley, California.

I'd love to see the software.

awesome... very inspiring to see effort and technology put to good (not to mention fun) purpose!

I presume that "anti-immigrant groups that are known to promulgate unlawful violence against political and economic refugees there" isn't meant to refer to the human smugglers who bring people across the border illegally, often in dangerous conditions and left to die as soon as things take a turn for the worse. It's funny how illegal immigrant status is now "political and economic refugee" - it makes it sound so much nicer, but these refugees have never been recognized as such.

I would assume that the "proto-fascists" mentioned there are these people: http://www.minutemanproject.com/ . I know nothing about them but on the surface they don't appear to be fascists. Of course, if the definition of fascist is "people who want to stop illegal immigration", then that might apply; however, I don't see that definition listed anywhere. It seems to me that today's Dilbert applies: http://www.dilbert.com/comics/dilbert/archive/images/dilbert20122065050322.gif . Usually it's not even worth conversing with someone who bandies about the word without much thought: I'd prefer to talk to people who are actually reality-based.

I'd like to second what Chandler said. Seems a shame that we havn't the resources to field UAVs for the Border Patrol, and yet this volunteer effort seems to be solving the wrong problem. I'd bet they'd have better luck looking for anti-immigrant vigilantes after last call in downtown San Diego. And you woulden't need a UAV to find them, either.

They are not "proto-fascists" or "vigilantes". Just think of them as "undocumented Border Patrol officers".

Speaking of evidence -- "... evidence of anti-immigrant groups that are known to promulgate unlawful violence against political and economic refugees there." -- where is it?