Lemonodor
A mostly Lisp weblog by John Wiseman
The Aftermath

At about 13 hours into our 24 Hour Comics Day, I was pretty sure I wasn't going to make it. I felt like I probably could finish if I wanted, but it would surely be extremely painful and the outcome wouldn't justify the effort.

I'm so glad I kept going (well, Lori made me, really). 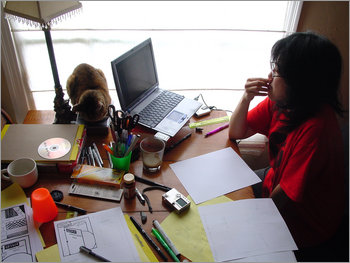 You can see that at 9:07 AM, twenty-two hours and seven minutes in, she's taking a thinking break. She's was probably trying to come up with some excuse for drawing everyone in her comic in robot form. Or she's wondering why she keeps buying sugar-free Jell-O. 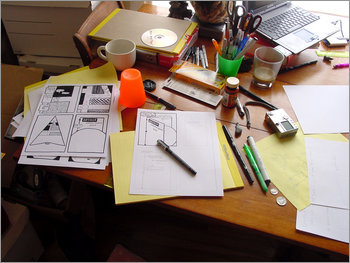 There's my Pac Man comic in progress. That was actually the second comic I did, which is acceptable under the rules of the event, which specify that you need to do a total of 24 pages of comics.

The first comic I did was about a very difficult time in my life, and my sister's life. 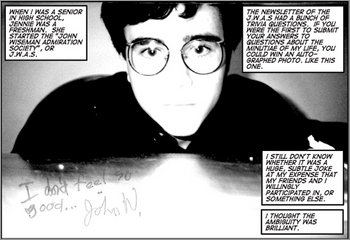 After 9 pages about fear and dysfunction, I needed something a little lighter. 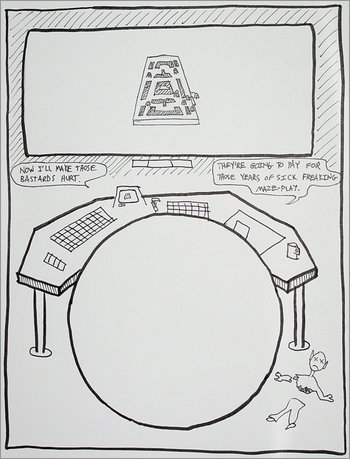 So I did a 12 page comic about Pac Man escaping the maze, stealing the spaceship from Asteroids, and returning to wreak his vengeance on the ghosts.

An astute reader may notice that 9 pages and 12 pages add up to only 21 pages. This is where I tell you that in the parlance of 24 Hour Comics Day, what I achieved is desribed by the term “noble failure”. This particular type of noble failure is called the Gaiman variation, because when Neil Gaiman did his 24 Hour Comic, he had only done 13 pages before time ran out. If that happens, you wrap things up and try to be content in the knowledge that you sincerely meant to do a full 24 pages, and that even the pros find it hard.

Lori's attempt also ended in noble failure. Her noble failure has a name that doesn't sound as cool, the Eastman variation (I only say that because I don't know anything about comics and I've never heard of this Eastman person, whereas everyone knows that Neil Gaiman is like totally awesome), but it means that when she couldn't finish in 24 hours she stuck with it and kept going until she was done. This is 100 times harder than “wrapping it up” and taking a nap, which sounds like the absolute cleverest thing when you attach Neil Gaiman's name to it.

I don't even feel bad about using Comic Life for one of my comics. You might think that would take all the challenge out of it, but in fact it seemed to be the opposite: the hand drawn Pac Man comic was easier and took less time. So don't condescend me.

As far as actually making comics goes, I don't know anything. I'm not an artist and I'm not really a writer. As far as reading comics goes, I've only read a few. But I'm totally pleased with my results, which I interpret to mean that I can do OK at drawing and writing and telling a story as needed. It was a nice creativity and confidence-building exercise.

Peter Laird, the other half, blew his money setting up the Xeric grants.

(I've climbed this particular Everest 3 times myself, and the last one was an Eastman variation. Sigh.)

I'd never heard of this before, but it sounds intriguing.

Any chance that you'll put your finished products online?

Probably, as soon as I have a chance to scan the Pac Man comic.