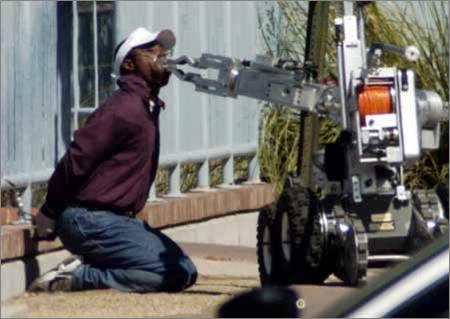 A robot was used to check the mouth of Jeffry Leon Lewis Jr. after the Army sergeant presented a note at a Tucson bank saying he had a bomb in his mouth. Lewis was handcuffed to to a fence during the procedure. No explosive device was found.

Police used the robot to pull duct tape off the robber's mouth. I bet you thought you'd have to wait until at least the 22nd century to read a sentence like the preceding one.

That's an odd comment, Mr. Anonymous. Here's a better one:

I remember seeing a video of a pizza delivery guy having his head blown off after the guys that he was making a delivery to lock a bomb around his neck. The plan was that he supposed to rob a bank and they'd take it off, but clearly it didn't work out for either party. Scary stuff.

Do you know if I kind find it online?

A little Googling came up with this:
http://infocult.typepad.com/infocult/2005/09/updates_on_the_.html