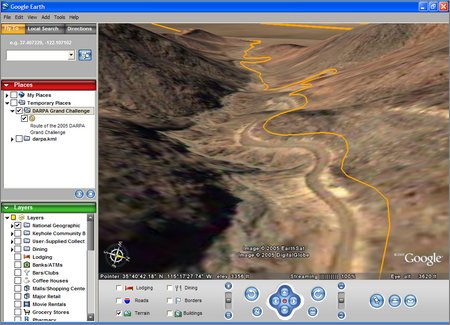 Taking the Grand Challenge route coordinates from this Red Team page and feeding them into this online KML generator, I get this Google Earth KML file.

I don't know why there's that obvious offset error—It could be that the CMU page doesn't contain the official DARPA coordinates (I don't think any team or DARPA has made them available to the public yet), but I'm guessing it's just a Google Earth error.

Perhaps they're referenced from different datums? I think Keyhole and Google Maps were developed by different teams, so it wouldn't be terribly surprising if they were using different datums.

I also seem to recall the same offset with the google maps of the race for 2004 (the one you created) and I am sure I have seen a similar one for the 2005 map.

One thing that needs to be reminded is that the GPS points are also given with some type of corridor information which is not on this map.