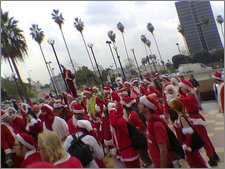 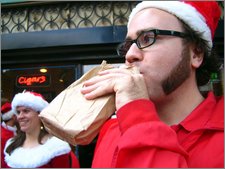 Lori and I contributed our santalaciousness to the coincidental gathering of hundreds of santas in LA this weekend. After breakfast at House of Pies (scene of the infamous Kirstie Alley backseat piejob photo that hit the tabloids last year) we marched directly to the Frolic Room, and then it was one bar after another with sex shops, bewildered onlookers, excited children, an art gallery, malls, strip joints, professional santas, wax museums, Japanese schoolgirls, Scientological Christmas displays, head shops, mechanical bulls and a million other things in between that could distract an easily distracted group of hopped up santas. 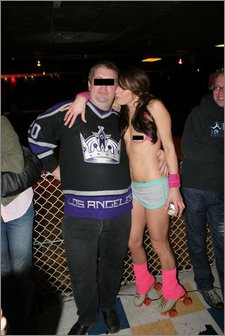 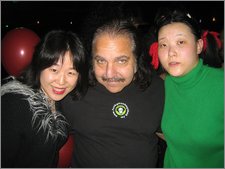 You'd think that would be enough for one day. But no, we had two parties to go to that night, including one boring office party. As often happens at these things, HR people used to having a margarita at Chili's once a month overindulge and begin acting inappropriately and stripping and rubbing and hugging. And of course Ron Jeremy was there. Duh, it's LA.

The next night the Museum of Jurassic Technology had their party. Steve Martin flaked this year, but Werner Herzog did strip down to his underwear and stroke his revolver.

Werner Herzog is awesome. He showed up in my area last sping about a year early for a film festival and had a screening of Grizzly Man at Williams.

Out of curiosity, why/how do you run into Ron Jeremy so often? Is it an LA thing?