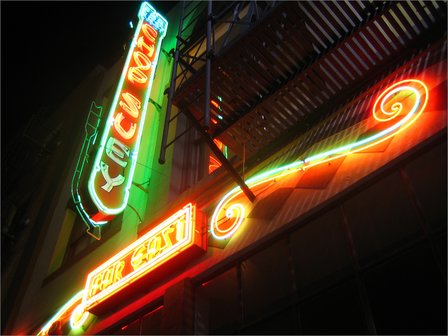 My old Powerbook was a relatively rugged dream machine. The new one, sadly, has not lived up to its predecessor and has been a big pain in the ass. It often crashes when I connect or disconnect the external monitor, and audio fuckups force me to reboot at least once a day.

The weird audio looping/stuttering is particularly annoying, and I'm not the only one experiencing it. My hope that the 10.4.4 update would fix the problem was destroyed about 48 hours after I installed it. The Apple Discussions website is filled with posts about the problem (1, 2, 3), Gizmodo's posted about it, Macintouch has a special section about it—My God, even Adam Curry's podcasting is being affected. When will the madness end!?

I think Apple's only response so far has been to say “To avoid this, run only one audio application at a time.” Har har.

Powerbook Defect Info is one of those grass roots consumer activism sites where they collect a long list of names of people wronged by a big company, people who want some remedy, damn it, and don't want it to be a nail-biting experience every time their IM client chimes with an incoming message (chime-chi-chi-chi-chi-ARGH, REBOOT). So I signed up. And I dugg it.

Yep, same here...
On top of the audio issue i've got a suspicion my screen on the new 17inch is of dubious quality in terms of color representation.
Comparison with my Cinema Display yield a lot of tears, comparison with my 2 yr old 15inch powerbook yield lots of questions ;-( And that's after using an expensive display calibrator... Seems my new 17inch lacks in the R category of RGB for some reason...

Problem is, the prospect of sending your 24x7 work-horse back is daunting and doesn't help the situation...

Apple sucks. It is going to suck more over the next 3 years. In 5 you will wonder what an 'iPod' was.

I've always found it supremely crappy that Apple doesn't offer credit secured advance replacement of defective products under warranty. It's a contributing factor to why some don't take them very seriously in the business space since you have to stock backup machines on site in the event of a manufacturing defect. Apple sure won't send you one.

My Rev A Aluminum PowerBook had the bright spots issue with its screen but is apparently outside the serial numbers that officially had the problem so wasn't covered by the extended warranty program. C'est la vie.

After upgrading to 10.4.5, I still had audio and crashing issues. After then reinstalling OS X from scratch and updating all the way back up to 10.4.5, all problems disappeared.