Tim Jasko's Lisp plugin for Eclipse, Cusp, isn't officially released yet, but it's kind of slick so far (and supports Windows, OS X and Linux).

In this screenshot you can see the Lisp Navigator/Project View, the outline of the file currently being edited, and a simple REPL (in which you can see that Cusp bundles and uses SBCL): 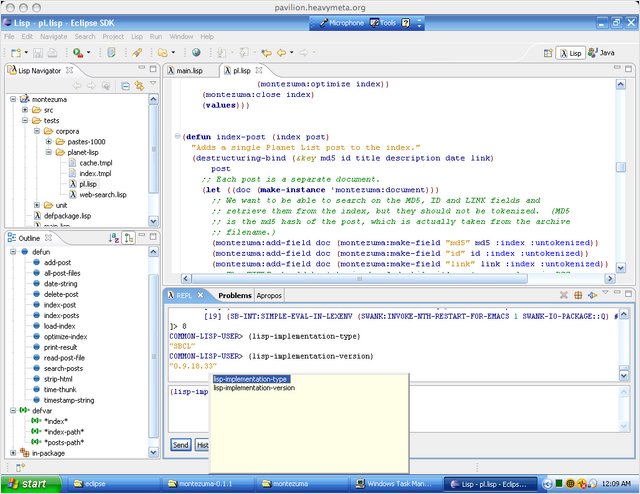 In the next shot, toward the bottom of the window you can see some warning messages from a compile.

It looks like Tim works at Paragent, which is hiring Lisp programmers.

Looks great! And more power to him. =)

I was playing around with version 0.6, but kept on having problems with the swank connection dying if there was a gust of wind in the neighboring state (actually, the debugger being invoked would crap it out), but it is slick looking and a nice alternatives to those who despise Emacs (me).

I despise Emacs, but Slime is pretty much the killer dev environment for Lisp, so a couple weeks ago I bit the bullet and started using Emacs fulltime for Lisp.

I've always been pretty much a vi guy and was disappointed that viper didn't play nicely with paredit, but after swapping left-Ctl with CapsLock, I'm at the point where Emacs isn't too bad (at least for Lisp development).

A possible long-term goal of mine is to create SWT bindings for Common Lisp and maybe revive one of the old Emacs clones written in CL, or to create a new one, shedding the terminal roots of (X)Emacs forever. At its heart, (X)Emacs is still a terminal program, even though they have gui version.

Wouldn't it be nice to have something as slick, and "usable" as Eclipe, but written in CL?

Can you come up with a test-case that'll kill it semi-reliably?

(Unless you're on OS X, in which case the problem is probably that multi-threaded sbcl has trouble staying alive when errors are raised.)

Tim, I'm using the windows version - which has no threading on SBCL, but the problem does occur when an error is raised sometimes.

I've tried 0.7 and the problem doesn't seem to be there anymore.

I guess the two big things (besides the obvious debugger issues) that I miss in Cusp are paredit and the emacs ability to remap keys so I can hit [ and ], instead of ( and ).

Anybody knows if there is an eclipe plugin that will remap keys?

Tim...if you're still reading...I've noticed that there is an option in the lisp preferences to specify the lisp executable and the slime directory. It looks like it's non-functional at this time.

How much work is it to specify a non-SBCL lisp (say CLISP). Does swank handle most of that, or is there a bunch of slime elisp code for the various lisps?