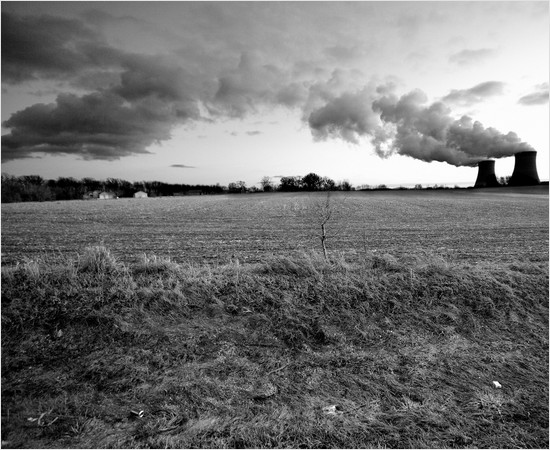 This is pretty much where I grew up.

The February issue of Harpers magazine has an article on unmanned military vehicles, “The Coming Robot Army” (not yet available online):

At $145 billion, the Army's Future Combat Systems (FCS) is the costliest weapons program in history, and in some ways the most visionary as well.

FCS calls for seven new unmanned systems. It's not clear how much autonomy each system will be allowed. According to Unmanned Effects (UFX): Taking the Human Out of the Loop, a 2003 study commissioned by the U.S. Joint Forces Command, advances in artificial intelligence and automatic target recognition will give robots the ability to hunt down and kill the enemy with limited human supervision by 2015. As the study's title suggests, humans are the weakest link in the robot's “kill chain”—the sequence of events that occurs from the moment an enemy target is detected to its destruction.

Through the weeds I spotted the SWORDS robot squatting in the dust. My heart skipped a beat. The machine gun was pointed straight at me. I'd watched Sgt. Mero deactivate SWORDS. I saw him disconnect the cables. And the machine gun's feed tray was empty. There wasn't the slightest chance of a misfire. My fear was irrational, but I still made a wide circle around the robot when it was time to leave.

I wish I could get hold of a copy of the Boeing promotional video the article mentions, starring Richard Dean Anderson as a UAV- and UGV-wielding commander trying to get his troops across a bridge.

The article also mentions the shortage of satellite bandwidth for UAVs as potential pressure for greater vehicle autonomy. GlobalSecurity.org claims that a single Global Hawk can require 500 Mbs—which is 5x the total bandwidth available to the entire U.S. military during the first Gulf War. If a vehicle can analyze its high resolution multi-spectral imagery onboard, decide what to do and then do it with less controller intervention, you reduce the necessary bandwidth and make it possible to operate more vehicles simultaneously.

“Raptors, Robots, and Rods from God: The Nightmare Weaponry of Our Future”, from Z Magazine, has a bit on the economics behind FCS.

"I still made a wife circle around the robot when it was time to leave." What, some woman was wandering past, and you said "Hey! Are you a mother?" and when she said "no, just a wife," you forced her to act as a decoy so you could slink away unharmed? You, sir, are a monster!

Heh. Remember back before everything was on the internet and you had to type everything yourself instead of copying and pasting?

Not really, no. (Not because I'm too young; I've just sort of blotted it out.)

Errors in quoted passages are always cause for pause; nobody seems to use "\[sic\]" much so you have to weigh up what was the most likely source of the error. Of course, once the Semantic Web comes along we'll have distributed AI to detect and resolve these mistakes for us, since that's an obvious prerequisite for reasoning; and then no-one will have to worry about inaccuracies on the internet ever again! Yay!

Wow, the perfect SF story to go with this, 'Gottlos' by Colin Kapp. In a future war, battle is fought by machines teleoperated by finely harnessed (but detachable) humans. The protagonist controller of one of these on the winning side comes up against a machine with finer response than should be possible with the limitations of bandwidth or latency. The shocking revelation is that the enemy has taken the next step and wired humans directly into the machines.

I just read that article and can only say that if you get a copy, you have to let me know. I was wondering the same thing. Supposedly the production value was insane.