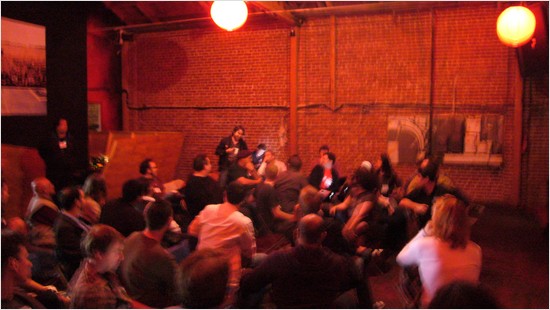 I am at Barcamp LA.

It was also nice to meet an IRC chixxor in person, along with her hacker boyfriend. Britta and Doug and I tried diligently for a while to liveconsume all the liveblogging and twitterstreams and other media being generated by the conference as it happened, but it proved to be too much. Or at least too something.

Actually I think Britta could have taken any five of her links from del.icio.us and woven them together in a presentation that would have beat 90% of what we've seen here.

I toyed with the idea of giving a talk on creating conversational interfaces, but I ran out of time to put anything together. And then I realized that what I'd really like is to talk about how to build a sub-$1K UAV. Except I'd call it “HOWTO Build a Remotely Piloted Bioweapon Dispensing Vehicle On a Budget”.