Bill Clementson passed word from someone trying to use my CLAIM library for creating AIM clients in Lisp that it seemed to be broken. I don't use that code anymore, but a little digging seemed to indicate that AOL had changed the TOC protocol that some third party clients, including CLAIM, use to connect to their network. The new protocol, TOC2 has some improvements, though it's also completely undocumented and hasn't yet been entirely figured out by the reverse engineers.

Still, I found enough information on the protocol to update CLAIM. Even though I think Jabber via Google Talk is destined to win the IM wars, and hence cl-xmlpp is the future, AIM bots can still be useful (and look at all the attention the MAKEBot has gotten recently).

You can download CLAIM 1.2 from its little project page, or you can ASDF-INSTALL it.

I've tested CLAIM 1.2 with OpenMCL, SBCL, ACL and LispWorks. The tests have not been exhaustive—the code loads, and the gossip bot example runs. 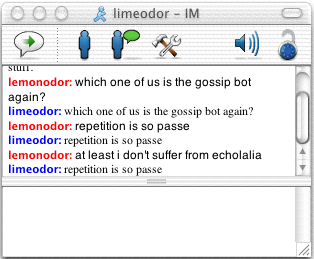 Testing with SBCL forced me to confront the fact that monovalent streams and code-char and char-code just weren't going to cut it with a mixed binary/text protocol, so version 1.2 of CLAIM requires Edi Weitz' FLEXI-STREAMS library. Sigh.

You do know that SBCL has bivalent streams, right? I'm not sure I understand your comment in any case; what precisely was the problem?

I don't perceive that there's a problem; it seems to me that Mr. Lemonodor's just saying that SBCL was behaving the way it was s'posed to, which is to say, harshing on his fast and loose coding. Is all. I had to explain it to Jay-Z too.