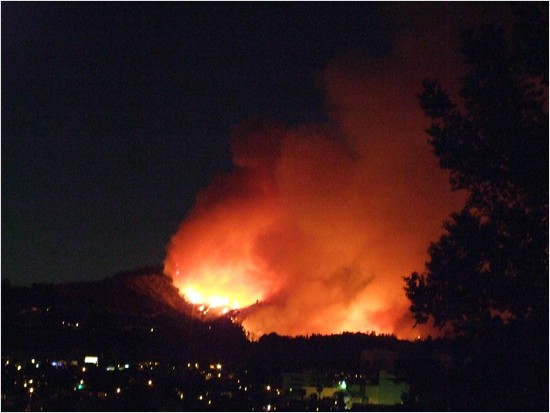 The view from my street

Mandatory evacuations, deer and coyotes fleeing into the streets of Los Feliz and Silver Lake, a couple thousand homes without power, swarms of helicopters sucking water from the Silver Lake reservoir. A couple hours ago the big smoker “exploded” and fire officials said “they could no longer tell how much of the fire was contained, backing down from earlier, more upbeat assessments.” 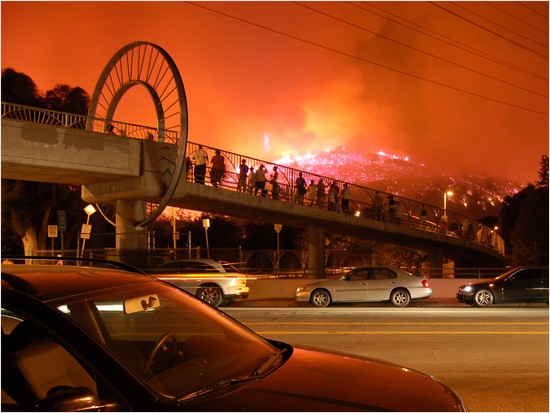 Gawkers on a pedestrian bridge, photo by Atwater Village Newbie

The fire is about 2.5-3 miles from here, and it looks like Hell. Lots of my neighbors are outside watching. It'd be sad if the observatory burns down now, having been open only for a few months after a five year renovation. 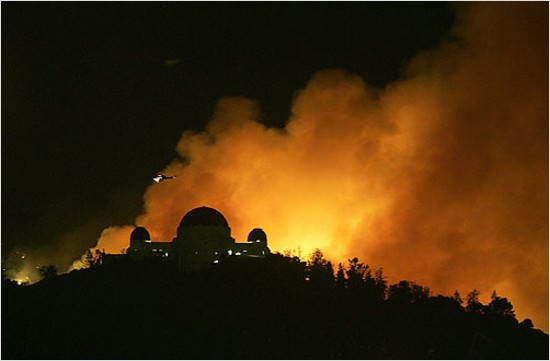 Griffith Park Observatory in jeopardy, photo by the LA Times

Supposedly this is the biggest fire in Griffith Park since the 60s, and there are rumors that some of the homes that were evacuated have already been looted. What a spectacle.

Boing Boing is all over it.

Is it really true this could all be because of some jackass golfer tossing his butt on the grass? What a fucking n3wb.

John McPhee's The Control of Nature has a excellent section on LA's relationship to it's landscape. The fires are wired into the ecology and the city deals - to an extent.

Yes, the fires are just how things work out here. Which is why I classify the fire as having done only minor damage--I don't think burned up trees and brush really count as "damage".