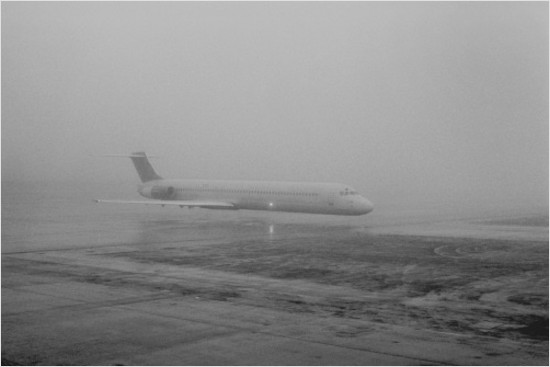 DARPA will visit and evaluate 53 teams for the upcoming Urban Challenge, but probably only last year's winning team gets their site visit written up in Wired and Spectrum.

“It drives like my grandma,” exclaimed one bystander, as Junior cautiously pulled up to an intersection, turned on its blinker, waited ten seconds, and then pulled cautiously and jerkily around the curve.

During the course of the morning, the Stanford team members put Junior through its paces before the watchful eyes of DARPA. First they tested Junior's ability to stop on demand, by remote control. Then the car navigated itself through a simple course marked out with yellow lines and orange cones, stopping at intersections indicated by white bars on the pavement. The next test involved driving through the course and passing around stopped cars. And the fourth test required Junior to approach intersections, wait while another car drove through it, and then drive through the intersection itself.

“Negotiating an intersection is a complicated thing,” said Anya Petrovskaya, a PhD candidate in computer science at Stanford, and the team member who wrote the software responsible for calculating other vehicles' speed and direction. “People do all kinds of things like making eye contact and waving their hands, and Junior doesn't have any of that information.”

Junior is an exceedingly conservative driver, acknowledged Montemerlo. Partly because of that conservatism, Junior got stuck during the third trial, where it stopped dead while passing a parked car, unable to go forward because it had insufficient clearance between the other car and the edge of its “road.”

Team leader Sebastian Thrun envisions a day when humans are no longer required to drive their cars. “First of all, cars are unsafe. We kill something like 42,000 people per year, and most of those deaths are due to human error. Second, cars are inefficient. They require a lot of time and attention to drive... I think that autonomous cars will really change society.”

Spectrum has links to videos of the Stanford site visit.

Not every team's visit went as well.