Lemonodor
A mostly Lisp weblog by John Wiseman
How to Forget

I've seen two movies in the past few days. 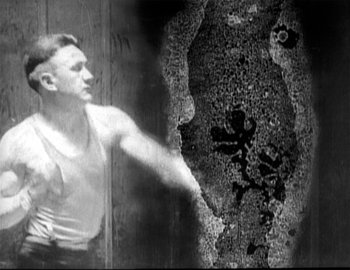 Bill Morrison's Decasia is a collage of archival footage, the celluloid base of which is in various stages of deterioration. Images darken, posterize, bubble and melt. A boxer jabs at a roiling ghost, a woman's face blisters and melts as she testifies in court, carnival rocket ships swoop out of what looks like the boundary between our universe and pure unformed chaos.

Much of the action in Eternal Sunshine of the Spotless Mind takes place in the mind of the main character as his memories of his ex-girlfriend are slowly being erased. There's a visual rendering of the deletion with objects and environments blinking out of existence or receding into shadow (and a lot more, the visual effects are much more impressive than this simple description probably implies).

These movies seem not entirely unrelated.

“We, amnesiacs all, condemned to live in an eternally fleeting present, have created the most elaborate of human constructions, memory, to buffer ourselves against the intolerable knowledge of the irreversible passage of time and the irretrieveability of its moments and events” — Geoffrey Sonnabend

have yet to see either of these films, but they seem, at least "eternal sunshine. . ", to be a variation of the age old problem of the guilt over moving on from our pain, the very pain which carried us out the abyss we were wallowing in. . .