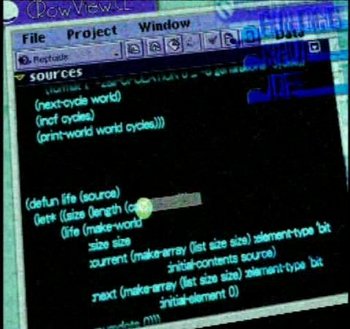 Anime can be pretty geeky, but it has a significant overlap with what might be considered cool popular culture; E.g., you can buy it at the Giant Robot store.

Something you won't see at the Giant Robot store until after they decide to carry those tubgirl posters is the Introducing Python video. Jesus Christ. That's supposed to be a marketing video?

Little known fact: everybody involved in the production of this video about the <font face="70s computer">Python Coding Language</font> knew how to code in Python, even the caterer. Another little known fact: none of them ever got laid again.

proving that lisp is the goth chick language of future choice

I remember seeing that when I watched Lain. It's not the only instance; they use Lisp elsewhere too. I was on vacation and not posting at the time, but I was quite amused by it.

Oh my. Is it too late to learn Perl?

I'm pretty sure that a later episode flashes one of Matt Wright's Perl scripts. On a psycho's psychadellic heads up display, IIRC.

I was watching this with Randal Schwartz some years ago. He didn't pick up on the Lisp code on the Navi until I pointed it out to him. When I saw the Perl code scrolling by, he thought it was C at first. Then going back frame by frame, he eventually identified it as wwwboard or a guestbook script. (I forget which.)

(As an aside, it's kind of funny seeing the Fortran-on-greenbar symbolizing the all-knowing Orwellian society in the newly re-released THX 1138. As if any sufficiently powerful Fortran program never collapsed under its own weight....)

Do not mock the Timbot!

I noticed lisp in the movie X-men 2. But if I were to judge programming languages based on what movies they appeared in, I'd go with Fortran because that's what HAL was written in.

HAL was written in Fortran? Suddenly everything becomes clear...

Please,
its not the looks, its the soul, right?
Ain't that the reason why you got interested
in Lori in the first place, too?
I mean, Eric Raymond could be her father?

The Lisp code pictured above appears to be from http://www-cgi.cs.cmu.edu/afs/cs/project/ai-repository/ai/lang/lisp/code/fun/life.cl

There is some emacs lisp code in Key the Metal Idol, episode 9. The surrounding context in the anime makes it rather amusing.