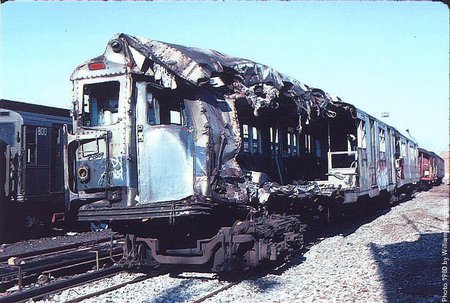 “A steel support girder nearly sheared one car in half.”

Freemind (a mind-mapper, about which I am 90% skeptical and 10% intrigued)

Is the skepticism over the implementation, or "Mind Mapping"? If the latter, I can highly recommend the technique for "creative idea development". Tony Buzan is "the man" on this technique.

I'd have to agree with Alex Peake. One of the very interesting feature when trying to start a project based on a somehwat fuzzy idea is the ability to export the document in a javascript format that allows potential collaborators to first see the larger paragraphs and then allow them to zoom in on the details of interest to them. For this reason, Freemind is on my list of documents allowing me to avoid cognitive overload.

I have been a user of Mind Manager (since 1999) and it has allowed me to concentrate on capturing the actual core material from a meeting, idea session, etc. without having to worry about format and mucking with MS Word or other tool. Give Freemind a try; it will give you a good tool to understand the mind mapping idea.

The Freemind site also provides a good ref to other free/freeware, commercial, and outlining alternatives.

I'm sad to see Zoe on this list; it's understandable that people are confused, because Kate Rhodes, its author, claims that it is open-source, but she has apparently invented her own meaning for the term "open-source," rather than using the standard definition. In particular, Zoe is licensed under a Creative Commons license that prohibits commercial copying, which is clearly far outside the constraints of the OSD.

I'm not sure what to do about this; if I were in your place, I would remove Zoe from your blog post and send Ms. Rhodes an expression of outrage that you had been deceived in this way.

For what it's worth, there was a NewsForge article explaining that (a) at some point in the past, Zoe was released under the Apple Public Source License, and therefore was probably open-source at that point and (b) Raphael Szwarc was the original developer, and Walter Onstine has also worked on it, so it's not clear who is to blame for its current confusing licensing state.

The license change to a non-open-source license was in December 2002, according to http://zoe.nu/:

ZOË is now released under the Creative Commons
Attribution-NonCommercial License.

The Zoe FAQ explicitly answers "yes" to the "is it open-source?" question, but the next question points at this license.

I'll drop the developers a line to see what they have to say.

Hmmm... ZOË is free of charge:

Its source code is out there as well:

The main restriction imposed by its Creative Commons Attribution-NonCommercial license is that you cannot use it for commercial purpose (e.g. to try make a buck out of it):

Noncommercial. You may not use this work for commercial purposes.

That the above restrictions don't fit your definition of "open source" is something for you to debate. For all practical purpose, ZOË is indeed "open source" as far as anyone else is concerned.

It seems that even Steve Mallett of OSDir fame as well as O'Reilly Media think that ZOË is "open source" enough for their taste:

Whether something is open-source or not isn't a matter of taste; it's a matter of definition. There's a well-established definition, adopted by the group of people that invented the term "open source," and widely accepted within the free-software and open-source communities. The definition is at
http://www.opensource.org/docs/definition.php

I'll talk to O'Reilly about posting a correction as well.

Hey John! About the packages to keep track of: monotone is definitely rockin' if you're looking for excellent version control systems (disclaimer: I've made utterly trivial OS X portability contributions to monotone, and for some reason Graydon put me in the AUTHORS file). Another sharp alternative is darcs, which has some patch-dependency-tracking features I've not seen in any other tool. As a matter of geeky interest, it's written in Haskell.

Both systems are changeset oriented and distributed. Both are pretty easy to use, but I think darcs has a slight edge here. OTOH, monotone is more like a database with files and hashes and crypto certs, and some code that interprets some certs in a specific way ("hash X is a revision of hash Y," "hash Y was written by author Z," "hash M is an ancestor of hash N," etc.) and out of that you get a version control system. I should also mention that it embeds the Lua scripting language, and some useful hooks are written in Lua. There's something very reassuring about knowing that when monotone says a branch is merged, that means that there's only one manifest with no children, its ancestor tree has integrity, hashes all match, etc. Similarly, darcs' theory of patches and sophisticated (even token-level) replacement features means that when darcs says there's a problem, there really is a problem.

I should say something about arch 1.x, too. It's powerful, has one merge feature I don't think anyone else does (star-merge), doesn't play nicely on Windows yet, and is probably overly complex for most people. In fairness, like monotone, it's almost more of a "version control toolbox" than version control system. In both cases, I can easily envision writing a few aliases or scripts to combine commands into friendlier use-case-addressing tools.