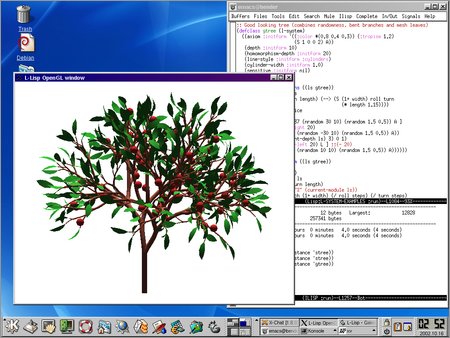 Knut Arild Erstad's L-Lisp is a framework for Lindenmayer systems. I wonder if I can find my old 2- and 3-D L-system code.

Franz and the Naval Postgraduate School (NPS) are considering offering a lisp-based course in physics for game developers. Email training@franz.com if you're interested. (I only know of the NPS in terms of its AUV work; AUVs are not UAVs, confusingly, but each term accurately describes what it really is).

fmo1 is a lisp-related project that, uh, “transposes non-metaphoric systems and grammar theory (of computer languages, abstraction and data containers) to the realm of expanded cinema”. I think it creates video. These guys were hanging out at CLUI last year, but I missed meeting them.

Peter Siebel's book Practical Common Lisp has shipped, and is selling well despite being available on the web for free.

Maciej Ceglowski (remember his Bloom filter article?) continues his work in the growing field of Paul Graham backlash with “Dabblers and Blowhards”: “I blame Eric Raymond and to a lesser extent Dave Winer for bringing this kind of schlock writing onto the Internet.”.

Very cool roundup, John. I too have absolutely no idea exactly what that fmo1 thing actually does... more poking around would be interesting, I think! :)

Man that Ceglowski piece would have been a great article if that jackass new anything about Art much less painting. The qualifier, "I've done oil painitng for two years" doesn't qualify him as a painter. It takes years of formal training to understand line and shape which he dismisses as arranging pretty blobs. I hate how anyone that watched a few episodes of Bob Ross assumes they're a qualified fine artist. His ignorance shines brilliantly when he dismisses Graham's comment of "Line drawings are in fact the most difficult visual medium" as Graham being a dipshit. As an traditional animator I can assure you that line is in fact the single hardest skill to master. You can hide anything with value and tone, but line leaves you naked to the world and any mistake shows. So conclusion: Maciej Ceglowski knows nothing about art and should take his own advice when it comes to writing about crap you don't know.

fmo1 appears to be some kind of surreal joke.

Have to concur with Fred. Ceglowski comes across as a know/do-nothing, and the more one reads Graham, the more you realize what he writes is based on solid experience....Lisp, art, education...whatnot.

Oh no! It's the Graham-backlash backlash!

I can't speak to Zach's motivation, but many of PG's recent pieces are little more than "my friends and I are great hackers, and like foo, therefore great hackers like foo.". In other news, daytime radio is carcinogenic