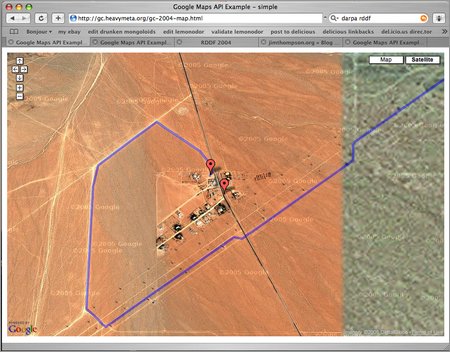 The new Google Maps API is really easy to use; I was able to create a map of the 2004 DARPA Grand Challenge route in about half an hour. After another hour or so I had some primitive clipping and adaptive level-of-detail working so that it didn't build the whole path of 2700 or so segments if you were just zoomed in on the Slash X cafe.

It wouldn't be much harder to add things like corridor widths or animations of the route. Or markers showing the maximum distance that each vehicle achieved (if that information were available).

Update: I couldn't help myself, I added markers at the final position of every vehicle that got out of the starting gate. The positions are roughly estimated from the Final DARPA report and some great circle distance calculations. If you click on a marker, you'll see the summary from the report regarding that particular vehicle.

Hmmm, how did that slip by me? I was using mygmaps. Sweet.

Neato! Do you have location data for each vehicle at various times? It would be *really* cool to animate the race with different icons for each team. :)

I haven't seen any location data like that for vehicles, though I would guess that each team was thoroughly logging their coords.

DARPA should add some kind of tracking/logging requirement that includes positions and velocities and stuff, just for our amusement.

As it turns out, for the 2005 race it seems that DARPA is going to be tracking vehicles. Here's a description of the E-Stop device that all vehicles must carry from a team member on the DARPA GC forum[1]:

For those of you who haven't seen this thing before, it's amusing. It uses a 900MHZ 1 watt bidirectional TDMA data link synchronized from a GPS clock. Both transmitter and receiver must receive GPS signals for the E-stop unit to synchronize and commmunicate. Once synchronized, they can survive 5-10 minutes of loss of GPS. There are separate 900MHz and GPS antennae.

The link is bidirectional; the "transmitter" reports what the "receiver" is doing.

The "tracking unit" has yet another GPS antenna and an Iridium antenna. It apparently phones home and reports position.