All via Unmanned Aerial Vehicles. 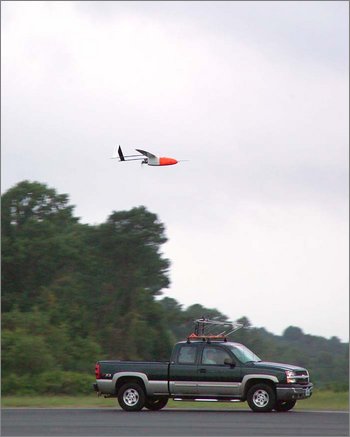 An Aerosonde UAV taking off

Hurricane researchers at the NOAA Atlantic Oceanographic and Meteorological Laboratory in Miami, Fla., marked a new milestone in hurricane observation as the first unmanned aircraft touched down after a 10-hour mission into Tropical Storm Ophelia, which lost its hurricane strength Thursday night. The aircraft, known as an Aerosonde, provided the first-ever detailed observations of the near-surface, high wind hurricane environment, an area often too dangerous for NOAA and U.S. Air Force Reserve manned aircraft to observe directly.

“It's been a long road to get to this point, but it was well worth the wait,” said Joe Cione, NOAA hurricane researcher at AOML and the lead scientist on this project. “If we want to improve future forecasts of hurricane intensity change we will need to get continuous low-level observations near the air-sea interface on a regular basis, but manned flights near the surface of the ocean are risky. Remote unmanned aircraft such as the Aerosonde are the only way. Today we saw what hopefully will become 'routine' in the very near future.”

“The UK CAA has for many years recognised the need for UAV regulation for predominantly civil UAVs. We are at a unique point in aviation history, and it would be helpful if our civil UAV regulation was also in register with military.”

The traffic department of Israel’s police has begun operating an unmanned aerial vehicle (UAV) as part of its enforcement of traffic laws...

Ground operators spot a vehicle committing a traffic violation and then instruct the UAV to follow the vehicle. Police cars stationed in the area then stop the driver and the officers are able to immediately show the violator the infraction recorded by the UAV.