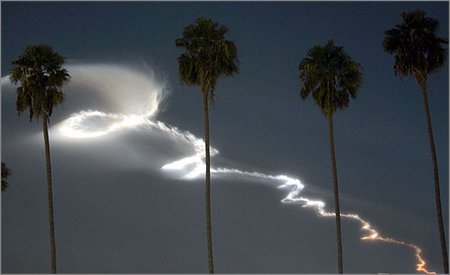 Last night Vandenberg's launch of a DARPA satellite caused everyone in LA to stop their cars and bust out the cameras. I wish I had seen it; the launch of a Minuteman III I saw a few years ago profoundly freaked me out for the period during which I had no working hypothesis to explain the phenomenon.

"profoundly freaked me out"

Imagine what happens when you see one way up in Reno ;-)

I was on duty posting security at Nellis AFB in Las Vegas, NV when I saw it. I've seen a lot of things in the military but when I saw this I though we were under some sort of alien attack. My peers felt the same way. Then I remembered the Vandenberg likes to freak out the western portion of the US by launching there shit at night.