Other weblogs offer periodic link roundups. But I've never seen one finish the job. Here at lemonodor, we round up the links, alright—but then we take them out back and shoot them.

Here are the suspects most recently implicated in the DARPA 2005 Grand Challenge. 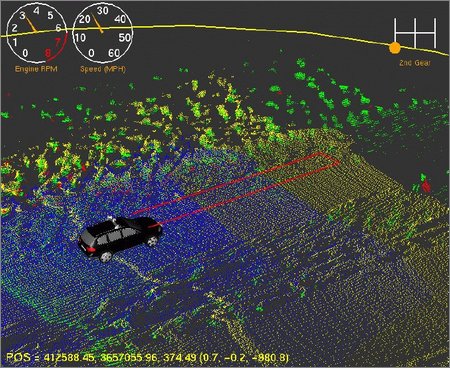 DARPA has posted team technical papers by all the finalists and semi-finalists. Hey—Stanford used Reid Simmons' IPC, which I've used a bit from MCL.

When the Stanford team first started testing Stanley, a blue sport-utility vehicle, he had a 12 percent blunder rate for “false positives” — incorrectly assuming 12 percent of the objects in front of him were obstacles big enough he had to swerve around them.

So the team instructed Stanley's software to take notes while a human driver maneuvered the car over different types of terrain. By following this guidance, the false positive rate dropped to one in 50,000 objects

Nelson Bridwell of Mirage Robotics has a video gallery of the 2005 Grand Challenge, including brief technical interviews with several team members.

Team TerraMax's video gallery includes a time-lapse video of TerraMax's entire first day on the course. Scream in terror as TerraMax roars over dry lakebeds at an apparent 180 MPH! Cry in frustration as it responds to phantom obstacles using its trademark one-step-back-two-steps-forward algorithm! Freak out during the Blair Witch-inspired scenes at the end, when the giant robot truck is alone in the pitch black desert with its only illumination coming from a flashing warning device meant to keep people away. What are those lights approaching? Who's in that pickup?! THE E-STOP MEN FROM D.A.R.P.A.!

The only acknowledged “difficult” section of road, Beer Bottle Pass, was so dense with waypoints that I can't see the road on a map overlay....200 waypoints in 1.6 miles (about 40 feet apart).