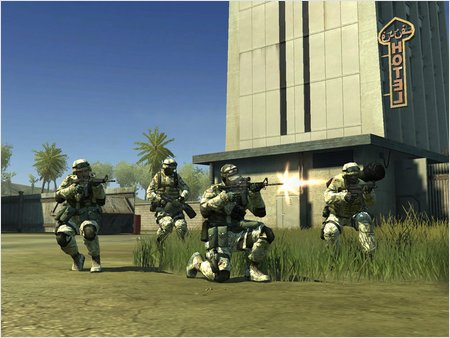 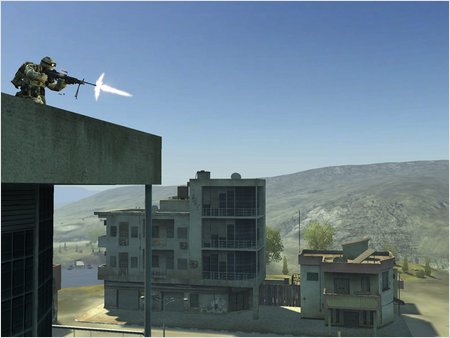 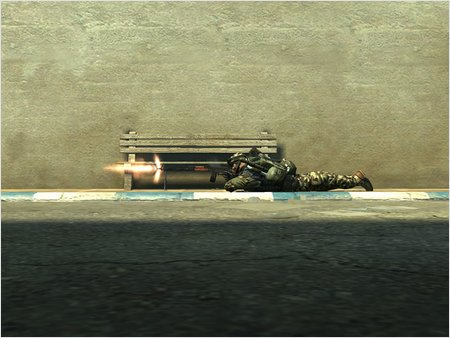 These screenshots are from Battlefield 2 (“Gulf of Oman”). They're really pretty, and military games are my vice, but it's also definitely creepy to look at these right now.

Yeah, I get the vice thing. I've been limiting myself to America's Army, partially because it's free, and partially because its lack of (near-)instant respawning promotes a more careful, maybe more realistic style of play. I agree that these shots are gorgeous, but given what I've said, can you convince me to blow the duckets on BF2?

64 well-rendered players in there with you. Wow.

How far are we from "Ender's Game"?

I certainly prefer non-realistic graphics. All the blood and corpses make me a bit sick. I play HaloPC a lot, that's as much blood as I can take. :)

Metroid Prime Hunters for Nintendo DS.
Take a look, click on Launch site and the multiplayer. Looks like UT/Quake. How awesome to play that on a handheld device wirelessly. You can now pwn in the sofa, in the bath etc etc.

I don't usually play these games, but what strikes me about these images is the total lack of a civilian population.

I wonder how the usual suspects in the US would react if companies in some other countries were selling video games where you scored points by gruesomely killing as many americans as possible. The line between "realism" and "indoctrination" seems to be getting thinner and thinner (as of course the sf war writers told us 30 years ago).

>>I don't usually play these games, but what strikes me about these images is the total lack of a civilian population.

Civilians are only useful as a tax base to the military-industrial complex.

Paul: Except in this game, you can get points for killing as many Americans as possible. (You just play the other side.)

BF2 tends to err in the other direction, treating various sides as being arbitrary and equivalent. It gives you the impression that any random opponent will be as well-armed as the U.S.

What bordered on indoctrination to me was the addition of "Insurgent" teams in the BF2: Special Forces expansion pack. Treating 'Insurgent Forces' as though they were equivalent to a national army (with their own flag, even) is misleading at best, conveniently propaganda-ish at worst.

(oh, I forgot to mention: no corpses, nor blood. yay!)

There are civilians in the Middle East? Someone alert the Pentagon! Musta missed some *somewhere*.

Add chocobos and I think we have a winner!

u guys got to quit battle field 2 and start playing 2142 it way better like in graphics, guns are sweet but there isn't enough of vechiacals but it is worth the money u pay for it

I just came across these BF2 Pictures and wanted to ask if I could use one for the my forum signature and if everybody else likes it to use for our new BF2-Clan at www.secretsofbattlefield.com. Check it out and give me a short notice if we can use it (it's the battlefield-2-2.jpg).
Thanks
El Fipso