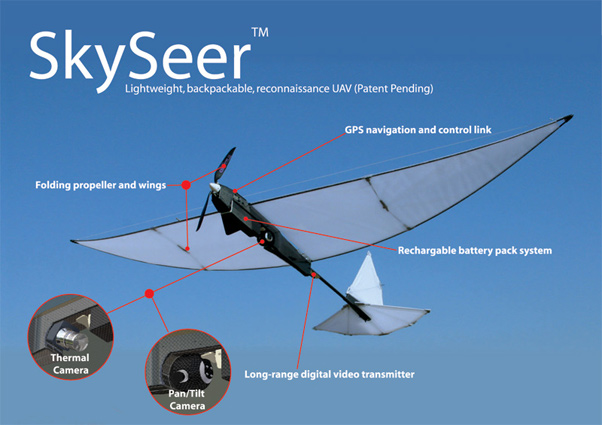 The Los Angeles Sheriff's Dept. has been working for several years with a defense contractor, Ocatron, to develop a specialized UAV for police work. Last week they gave reporters a demo.

The stealth quality of the SkySeer is a big advantage, according to police.

“The plane is virtually silent and invisible,” said Heal. “It will give us a vertical perspective that we have never had.”

The Los Angeles Sheriff's Department operates a fleet of 18 helicopters, priced between three and five million dollars each. The SkySeer will cost between 25,000 and 30,000 dollars.

“We never have enough helicopters,” said Heal. The police helicopters are in near-constant use, and the SkySeer would alleviate some of this pressure.

I think he's completely correct and UAVs will probably become standard, even ubiquitous pieces of equipment for police. Especially as the industry picks up and prices fall way below the $20-30K estimate for the SkySeer. The only possible obstacle seems to be a regulatory one, and I don't mean any kind of protection of privacy.

It turns out that the FAA is upset with the Sheriff's dept. for not getting clearance for the flight, even though it was just a demonstration for reporters.

“I wouldn't want to term us as peeved, but we were definitely surprised,” FAA spokeswoman Laura Brown said. Sheriff's officials were told "that we were more than willing to sit down and talk about a certificate — but that was before their first flight.”

The FAA is now investigating Friday's demonstration to determine whether the Sheriff's Department should face disciplinary action.

“A private citizen can go to the store and buy one of those model airplanes and fly them around. But because we're doing it as a public service, we have to deal with the FAA?” said Sheriff's Cmdr. Sid Heal. Once they “take a deep breath and realize there was no malice intended, it will get back on track.”

From what I understand, it's true that if a hobbyist flies a drone (and lots of people are already flying homebrew drones) below 500', the FAA generally doesn't care. But the hobbyists have their own regulatory worries—the Academy of Model Aeronautics has its own rules for members, and they're very worried about the FAA's reaction to widespread hobbyist UAVs. Therefore the AMA prohibits models with autonomous navigation, and requires operators of remotely piloted vehicles to “maintain un-enhanced visual contact with the aircraft throughout the entire flight.”

From an article about a possible new FAA classification scheme for UAVs:

The new classifications would also include a category being referred to as “lightly restricted” to cover aircraft currently restricted to flight within visual sight as the primary basis of risk mitigation. This category includes radio-controlled model aircraft, particularly model helicopters adapted for commercial use in aerial photography; small blimps used for advertising; and agricultural UAVs.

The “lightly restricted” classification represents systems that “are giving us a good deal of problems right now and we are really wrestling, on a daily basis, with this particular group”, says Steve Swartz, from the FAA’s recently established unmanned aircraft programme office.

I think even the regulatory issues involved in the integration of autonomous vehicles into our society are completely fascinating.

wmc2: Totally. I wonder what sort of precautions they're taking.

(In RC airplane lingo, a "shoot down" is when someone else broadcasts on your frequency and causes interference that crashes your plane.)

I have been in UAV business since 1988. My company "UAV PRO" is experienced with both government and private clients in U.S. and overseas arenas (Iraq, Kuwait, Australia, England, Germany, Africa, Israel, Bahrain, Saudi Arabia). The company?s employees represent over 20 years of increasing technical and management responsibility in all facets of Unmanned Vehicles, including design, engineering, research and development, training and maintenance. UAV PRO is a company focused on providing top quality support and consultation services to both the military and civilian Unmanned Vehicle community.
BUT, The FAA is hurting the small uav business.
And small uav businesses like me.
We need help from the DOD and other agencies just to stay in business.

It would be interesting to get airline captains opinion about a flock of vigilante-crazed UAVs programmed to intercept anything "dangerous" with or without human assistants.

You state: "We need help from the DOD and other agencies just to stay in business".

Your statement is not surprising given the level of
corporate capitalism in the U.S.A. With all of the U.S. inflamed conflicts around the world, it is hard to sympathize with your plea for help.

I've seen these planes at hobby stores. You could load
a van with a dozen of these babies; park anywhere; and launch them on a missin to Osama bin Laden's undisclosed, secure location.

"Especially as the industry picks up and prices fall way below the $20-30K estimate for the SkySeer."

I think prices for stabilized FLIR cameras would have to drop dramatically first. Those things are damn expensive.

I wonder if the sheriff's UAV has a FLIR.

I've started blogging about safety-critical systems, and in my recent post I created a link to your blog entry 'Los Angeles Sheriff's UAV Runs Headfirst Into the FAA'.

I was wondering if you consider linking to my blog at: http://windriverblog.typepad.com/parkinson/