Lemonodor
A mostly Lisp weblog by John Wiseman
What Is It Like to be a Spider? 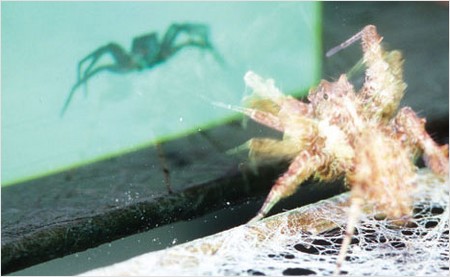 Last night the Institute for Figuring sponsored a lecture on spider vision and cognition by Simon Pollard: “What Is It Like to be a spider?”

Dr. Pollard started by saying that spiders are not the little automatons we might think they are (hey, I'm pretty sure humans are automatons, but I don't hold it against them). It seems that jumping spiders (one particular group of jumping spiders, Portia, was the focus of the talk) exhibit some behaviors that most people would think of as too complicated for a spider, which just reminded me of Valentino Braitenberg's “law of uphill analysis and downhill invention.”

Jumping spiders will spot a prey spider sitting in a web, then take a route that eventually gets them closer to the prey while staying hidden from it. This hunting “detour” may take hours, during which the jumping spider often does not have the prey in visual contact. That is, it seems to have “memory” of a “goal”.

Jumping spiders have amazing vision for such small creatures—something like 1/5 the visual acuity of human beings while being smaller than our eyeballs. They can recognize (and will attack) TV images.

They achieve this visual acuity through a pair of telescopic eye tubes. 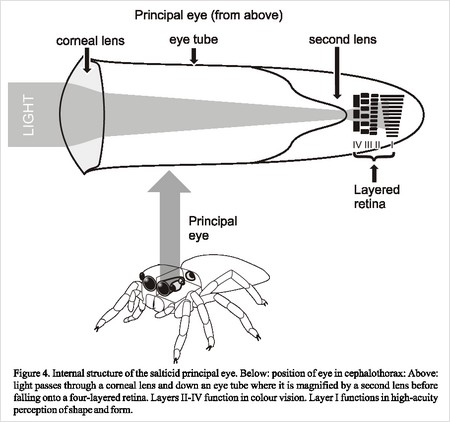 The fovea is small with a very narrow field of view, but the spiders seem to build a detailed image by scanning an object of interest—which they do without moving their heads or bodies or eye lenses, but by pivoting the eye tubes inside their heads. The video of this was a big hit, with everyone making surprised and amazed noises when they saw a spider, sitting motionless, in front of a powerful backlight that allowed us to see the shadows of the eye tubes swiveling like mad inside its translucent head, taking in the scene.

“...when we look into Portia's dark, bulging eyes, the lights are on, somebody's at home, and a lot more than an eight-legged automaton is staring back.”

Thanks alot. Now all I can think of is the jumping spider using his "dark, bulging" eyes to see me as he rounds obstacles in his "hunting 'detour'".

Damn, that's cool. Any chance the video will be posted for download?

Interesting article. The Salticidid Portia is especially interesting, as it hunts and eats nothing but other spiders- deliberately ensnaring itself in their webs then ripping free and leaping on the web's owner when it comes rushing out expecting lunch!

Nice article, I wanted to share an interesting trick my wife accidently discovered using a laser pointer. She was trying to point out a jumping spider on the ceiling by pointing at it with her finger, when that failed to get me to see it she went and grabbed a laser pointer she had. Then she began making circles around it so I would see it, as soon as she did the spider noticed the pinpoint of light and began to follow it. It followed the pinpoint exactly, you could make it spin around in circles, do a figure 8, whatever. Try it out, it's great fun.

Jumping spiders and Lisp? We should all know that they prefer scheme.

I hate you John Wiseman