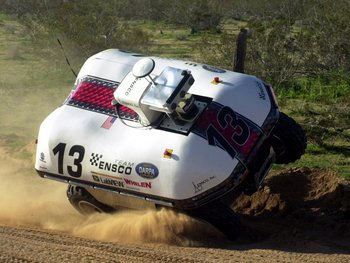 The 2004 DARPA Grand Challenge is over. The final standings are in. Every media report so far has focused on the fact that nobody made it to Las Vegas, and missed the fact that this was actually a historic, impressive display of robotics.

Lori and I went, and we took some photos.

Even if the event in itself marked some sizeable step for robotics, the result is still rather pathetic when compared to the arrogant rhetorics on for instance the red team website.

And frankly, it's wicked bad publicity. Tons of people at work keep asking me how CMU could spend $5M and only make it 7 miles. And these are technical people, with degrees in engineering or computer science. I can only imagine what a layperson must think.

It certainly has proven educational to see how few people actually have any inkling—at all—just how complex the domain is.

I'm quite surprised that DARPA would fund such an event. Seems like they have money to burn. There are definitely less expensive ways of determining what the state of the art is. But it was fun to look at the pictures, thanks John.