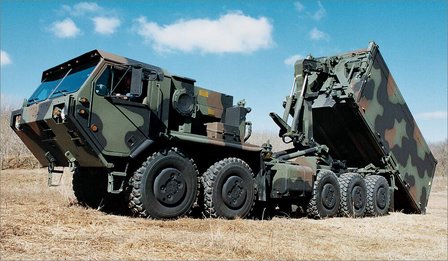 Is this the first commercial spinoff of the DARPA Grand Challenge effort? [via Robot Gossip.]

OSHKOSH, Wis., Jan 23, 2006 (BUSINESS WIRE) -- Oshkosh Truck Corporation (NYSE:OSK) announced today that it has unveiled an unmanned version of its Palletized Load System (PLS) vehicle at the U.S. Army Tactical Wheeled Vehicle Component Technology Demonstrations in Yuma, Ariz. Showcasing the immediate application of the technology for the U.S. Army fleet, Oshkosh is demonstrating a real-world mission scenario as the driverless truck transports cargo between destinations seven miles apart in the Arizona desert. The unmanned navigational kit being applied to the PLS was tested at the 2004 and 2005 DARPA Grand Challenge races, and has undergone additional testing in desert environments, similar to those in the Middle East. Oshkosh is partnered with Rockwell Collins (NYSE:COL) and the University of Parma, Italy, on the development this unmanned navigational kit.

Is there a contract available to make the first unmanned truck stop in the desert?