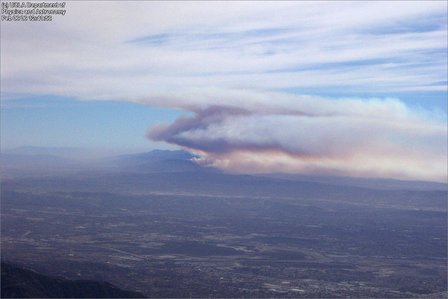 This morning I was sitting at my desk when I noticed the room had become oddly dark, and orange. I peeked out the window and saw that the sky was smudged and the sun was an alien red that meant something more than the typical smog was at work.

Right now you can see the source of the dark cloud, a fire in the Cleveland National Forest, through the Mt. Wilson Observatory webcam.

I was sitting at the oil changing place and there was a lot of ash falling to the ground and on my person. I thought it was a little weird.

this explains it, as well as that big nasty dark cloud.

Despite this fire, the air was surprisingly clear today. I had a good view of the mountains this afternoon on my bike ride home and there are more stars visible tonight than is usual.