I've been experimenting with Trac, which integrates a wiki with simple bug tracking and subversion repository browing.

Trac supports syntax coloring of any programming language that either GNU Enscript or SilverCity support, which seems to include every single thing other than Common Lisp. Sometimes I use Lisp, so this annoyed me. I used XML-RPC to glue Brian Mastenbrook's colorize (which is used by the paste service at paste.lisp.org) to Trac. 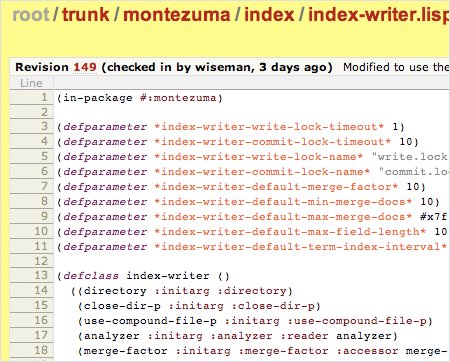 colorization-server.tar.gz has the Lisp side of the XML-RPC glue, a small patch to colorize to add the option of not doing fancy paren matching (which didn't fit into Trac's output very well) and a little SBCL-specific startup script.

Copy the CSS that's in colorize's *coloring-css* variable into a file called lisp.css and put that file in Trac's htdocs/css directory. Start up a lisp running the colorization server, restart Trac and you're set.

I put in a small LRU cache to avoid hitting the XML-RPC server every single time Trac needs to render a page containing Lisp source code, but even with cache misses the XML-RPC roundtrip is barely noticeable. I use Trac in standalone mode, which is probably the only reason the caching works—if you use CGI mode, you're on your own.

Of course, trac-lisp.py could easily be modified to be a more general interface between Trac and colorize, with support for any language colorize understands.

Later: I didn't realize Trac had syntax to turn on language-specific coloring of code blocks on wiki pages, in which case my caching would do the bad thing. I've fixed the code. 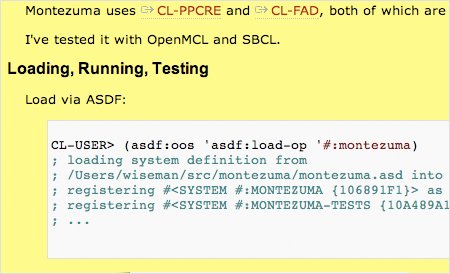 As a lot of Lisp projects are currently darcs based instead of svn you might want to check out: http://www.darcs.net/DarcsWiki/TracOnDarcs as well.