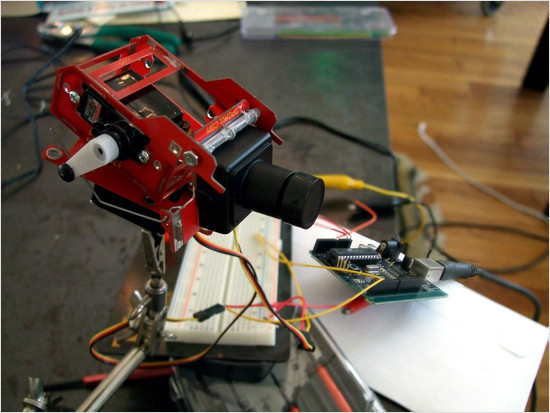 So I fancied up the Arduino code to take commands from the serial port. Then I wrote some Python code to read the tilt sensors in my laptop and send commands to the Arduino. Here's the result:

My Python code runs the smsutil program from SMSLib (patched to flush its output after each line; I couldn't figure out how to get the buffering to work correctly otherwise), then uses Tod Kurt's arduino-serial program to send commands to the Arduino (because when I opened the serial port directly in Python the program would hang).

It's all kind of hacky because I was in a hurry, but it works.

Update: I had some problems with the serial comms getting out of sync, so modified the Arduino code and the Python to make it a little more robust.