Terje Norderhaug is doing some cool stuff. His Swank client for MCL “turns MCL into an IDE for other Common LISP environments.”

Put another way, you can (for example) run the ClozureCL compiler and environment from within MCL, developing and executing code simultaneously on MCL and ClozureCL. Forms in Fred or an MCL Listener can be evaluated on ClozureCL. The MCL Apropos Dialog, Trace Dialog, Package indicator and Packages Inspector all works for ClozureCL much like they do for MCL.

So instead of using Slime in emacs as the Swank protocol client to provide a Lisp IDE, you're using MCL. Here's an example of typing bad code into MCL, having it evaluated it in ClozureCL/OpenMCL, and choosing a restart from MCL: 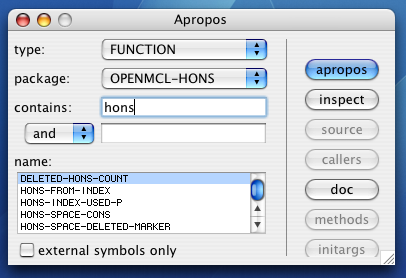 I am sure you all have noted that the MCL Swank Client is a step towards integrating the OpenMCL/ClozureCL compiler into the MCL IDE... It's becoming like having two LISP environments in one, bringing OpenMCL back home!

Imagine MCL running on Intel under Rosetta, integrating an Intel- native ClozureCL environment. That would give us the best of two worlds and a smooth transition path for MCL and MCL applications to run on Intel.

This might be what helps us escape from the emacs ghetto.