Two people so far have taken Peter Siebel up on his challenge of creating an RSS reader that can compete with a 150-line Groovy implementation. 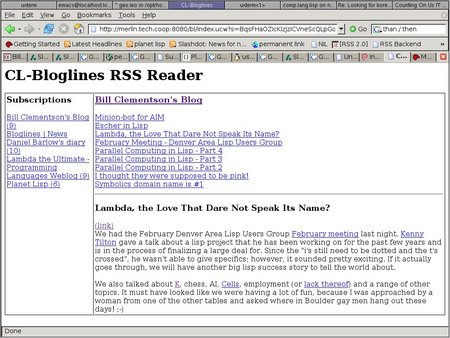 Drewc used a secret GUI weapon I had forgotten about when I said that the only way someone would be able to compete with the Groovy app was to integrate with Java or Cocoa, or use CLIM: He created a webapp and generated HTML.

It took me about 3 hours to write. The initial quick hack version took only about an hour and was about 120 lines, but it was not as nice as this one :).

The final version of the code, at about 200 lines, looks pretty good and wouldn't be hard to turn into a desktop GUI app.

Rich Hickey used some serious Java integration, in the form of his not-yet-released successor to JFLI, Foil. His code uses SWT and attempts to mirror the structure of the Groovy version.

The code length is about the same. I don't see any wins for Groovy here.

I'm kind of excited about the idea of playing with SWT, which seems to be the first Java GUI API that doesn't have crippling design faults. (Among other things, SWT isn't ugly. But I didn't know it was possible to use it from Lisp.)