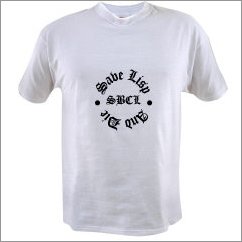 In case you aren't hardcore enough for a tattoo, t-shirts are now available.

My girlfriend tells me it's not kosher in Germany, since the lettering evokes the Nazis. It's not illegal, just unfortunate.

Which sucks, because it's probably the first tshirt I'd seriously want to buy and wear.

Incidentally, McCarthy's in Amsterdam in a couple days for some lecture. I'm kind of hoping-beyond-hope that some Lisper will attend wearing that Lispmeister tshirt with McCarthy's face on it. It would definitely disturb the fuck out of him.

> My girlfriend tells me it's not kosher in Germany, since the lettering evokes
> the Nazis. It's not illegal, just unfortunate.
>
> Which sucks, because it's probably the first tshirt I'd seriously want to buy
> and wear.

I think you care about this solely because your girlfriend does. And she cares
because she has fear that people who see you wearing this shirt would relate the
Fraktura font to the Nazis and then would go on and peg you as someone who
identifies with such Gedankengut.

By all means, speak with your girlfriend whether this fear is any rational by
this time and whether the consequences, she hypothetizes, have really any
meaningful effect on either of you.

I couldn't post my last comment before I changed the word Nationalsoc@ialist to
Nazi, because `soc@ialist' contains the phrase `c@ialist' which seems to be on an
internal dead list. I assume it's for spam detection, so I'm not sure if you
care to fix it, but you should at least be aware of it.

(the @s are to break the detection mechanism, let's hope this works.)

Well, it's just that I'd rather not go around with a tshirt that installs uncomfortable thoughts in people. I mean, I look something vaguely like this:
http://www.pentaside.org/sight/corner.html

Not your image of a typical Nazi. But it seems questionable to wear some Lisp propaganda for a negative effect, rather than a positive one.

God knows that I wear things my gal doesn't like, so it's not like I'm codependent on her opinion. ;) But the fact that was her first reaction, made me second-guess my enthusiasm.

Damn, I guess anything that has a Biker connotation in the US might well have a Nazi connotation. I'm definately going to buy one, but now that I live in Munich, I guess I'll have to be careful about where I wear it. Bad ass, I just wish I could get it in white lettering on the back of a black hoodie, Oakland-style.

No guarantees, but I'm going to attempt to get white-on-black versions of this for the Amsterdam meeting ... maybe to counteract the overwhelming Franz t-shirt-vertising presence :-)

I should have black shirts with white text online by Monday. Worst case would be Thusday. With only one side printed they should go under 10 US$.