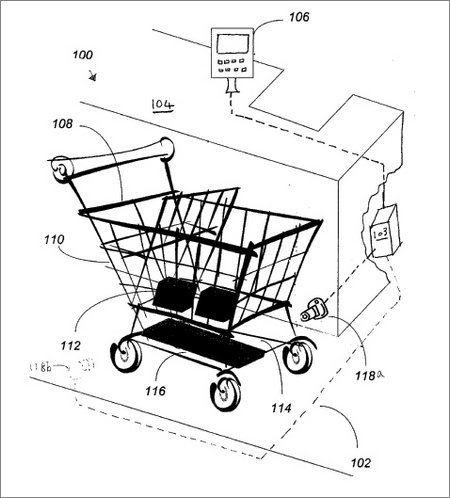 Sometimes people post comments to this weblog asking what sort of work I do.

The diagram above is from a patent application related to the work I've been doing for Evolution for the past year and a half. LaneHawk is a vision-based system that uses that little camera (118a) to recognize what items are in the bottom of a shopping cart and ring it up at the cash register automatically. The idea is that a surprising number of people actually do forget to pay for what's down there, and cashiers forget to check. This results in what the grocery industry calls “bottom of basket loss,” or BOB loss.

Interestingly, BOB loss is cultural. Some American and European grocers have such a big problem with it that they remove the bottom racks completely. On the other hand, I've heard that in Japan it's basically a personal failure to leave a market with an unpaid-for item, therefore LaneHawk may not have too many customers over there.

Lanehawk is also a brand of bowling ball that includes an interesting line of novelty balls, but I'm not a huge bowler, and I have nothing to do with that. 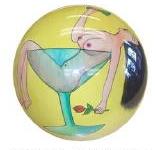 LaneHawk is built on ViPR, which is the advanced vision system Evolution has developed as part of the Evolution Robotics Software Platform. ERSP itself (on which I used to work more directly) has been used most notably in the Sony Aibo robot dogs, but it gets used in quite a few prototype & research robots by some of the big robotics companies (the sort of robot that often show up in Yahoo News photos doing something goofy like wearing makeup or playing a guitar while a small person rides on its back).

Examples of ViPR working under a variety of conditions. The first column presents the two objects to be recognized. The other rows display recognition results.

It turns out, and I shouldn't be surprised, that there are companies that spam anyone whose name is on a patent application.

Your above invention is among the more than 80,000 new inventions which are published world-wide each month. That clearly exceeds 1 million patent applications annually.

So that's what I do. That, and make transparently boasting posts to lemonodor so my dad will see that my name might be on a patent one of these days. Hi dad!

That's a pretty cool sounding job. I make video game software, and when we do 'vision' for our ai it's real simple because we know exactly what's out there in the game world!

o.k., so you wrote TEL, which is C++. I am still scratching my head what your work has to do with Lisp?!

Klaus: I don't do Lisp for a living anymore.