There's a new Grand Challenge website up, which includes image galleries that are updated daily, and what will be a live tracking app.

(The DARPA site uses some ridiculous cookie scheme; do they not want people to link to their images?) 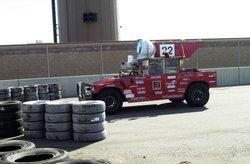 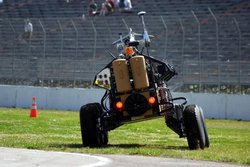 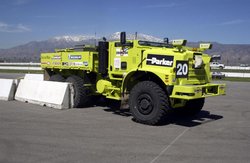 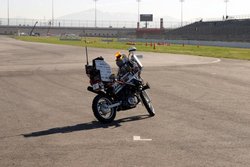 “Oh no. That's not a good sign,” Todd Mendenhall said as his six-wheel creation started to bellow and spew smoke.

But now, after three days of trial runs, only four vehicles have been able to complete the 1.25-mile qualification course, which includes hairpin curves, 10-foot cattle gates and a minivan blocking the course. They have to do it twice to get into the race.

The TerraMax truck from Oshkosh, Wis., pushed a highway concrete barrier out of the way as it left the starting chute and slammed into a minivan, pushing it 5 feet before event organizers pressed the remote kill button — a required feature on these machines. Another vehicle lost its global positioning signal and looked for it for 10 minutes, turning in circles, before it was shut down.

Ghost Rider, based on a motorcycle, is one of the more novel entries. ... The motorcycle fell over more than 150 times during early test runs, Levandowski said. In its first trial run Tuesday, it fell after traveling about 15 feet.

This is gonna be so cool.