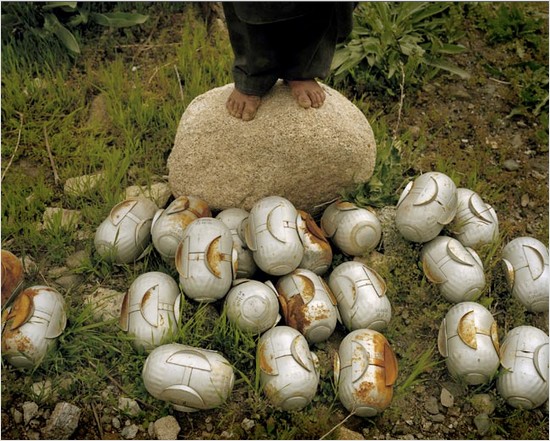 The FAA is trying to clarify exactly what guidelines apply to UAVs.

The FAA recognizes that people and companies other than modelers might be flying UAS with the mistaken understanding that they are legally operating under the authority of AC 91-57. AC 91-57 only applies to modelers, and thus specifically excludes its use by persons or companies for business purposes.

The FAA has undertaken a safety review that will examine the feasibility of creating a different category of unmanned ``vehicles'' that may be defined by the operator's visual line of sight and are also small and slow enough to adequately mitigate hazards to other aircraft and persons on the ground. The end product of this analysis may be a new flight authorization instrument similar to AC 91-57, but focused on operations which do not qualify as sport and recreation, but also may not require a certificate of airworthiness. They will, however, require compliance with applicable FAA regulations and guidance developed for this category.

“FAA cracks down on use of model aircraft rules for UAVs”:

The notice is a direct response to increasing efforts by US law enforcement agencies and some small UAV manufacturers to introduce systems into operational service on the back of model aircraft regulations.

Davis singled out the St. Petersburg, Florida-based Cyber Defense company as an example of firms providing incorrect policy advice to potential users about the status of the FAA's model aircraft regulations.

Cyber Defense has attracted high profile attention in the USA in recent weeks as a result of a sale of its Cyber Bug parafoil system to the Brevard County, Florida sheriff’s department. That system is to be delivered in March. The FAA has advised the law enforcement agency that it will not be permitted to operate the system - a move which the sheriff’s office is publicly advising it intends to challenge.

FAA officials were steadfast in saying Palm Bay's unmanned vehicle should be grounded until further notice from the federal agency.

“We control the airspace, and we control who can fly what, where,” said Les Dorr, a spokesman for the federal agency. “Our primary concern is the safety of the airways. If (the police department) starts using the unmanned vehicle then they run the risk of being told ‘no, they can't do it.’”

But CyberDefense Systems, a St. Petersburg-based company that markets the Cyberbug said the aircraft -- like a model plane -- flies below 400 feet and would not interfere with flight patterns.