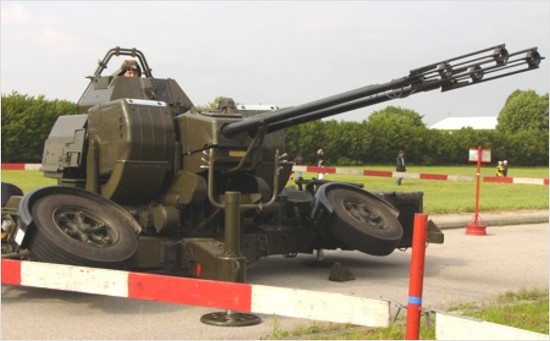 It is believed the soldiers were killed when the gun jammed moments after the exercise began.

When the female officer went forward to help the gunner clear the blockage, another shell was accidentally fired, causing some of the unspent ammunition in nearly-full magazines to explode.

This, in turn, caused a “runaway”. There was nowhere to hide.

The rogue gun began firing wildly, spraying high-explosive shells at a rate of 550 a minute, swinging around through 360 degrees like a high-pressure hose.

The unknown officer tried to shut the gun down but she couldn't because the computer gremlin had taken over. Her fate was unknown at the time of going to press.

Mangope told The Star that it “is assumed that there was a mechanical problem, which led to the accident. The gun, which was fully loaded, did not fire as it normally should have," he said. “It appears as though the gun, which is computerised, jammed before there was some sort of explosion, and then it opened fire uncontrollably, killing and injuring the soldiers.”

Other reports have suggested a computer error might have been to blame. Defence pundit Helmoed-Römer Heitman told the Weekend Argus that if “the cause lay in computer error, the reason for the tragedy might never be found”.

During the shooting trials at Armscor's Alkantpan shooting range, “I personally saw a gun go out of control several times,” Young says. “They made a temporary rig consisting of two steel poles on each side of the weapon, with a rope in between to keep the weapon from swinging. The weapon eventually knocked the polls down.”

Young says he was also told at the time that the gun's original equipment manufacturer, Oerlikon, had warned that the GDF Mk V twin 35mm cannon system was not designed for fully automatic control. Yet the guns were automated. At the time, SA was still subject to an arms embargo and Oerlikon played no role in the upgrade.

“If I was an engineer on the Board of Inquiry, I would ask for all details about the software for the fire control system and gun drives,” Young says. “If it was not a mechanical or operating system error, you must find out which company developed the software and did the upgrade.”

Young says in the 1990s the defence force's acquisitions agency, Armscor, allocated project money on a year-by-year basis, meaning programmes were often rushed. “It would not surprise me if major shortcuts were taken in the qualification of the upgrades. A system like that should never fail to the dangerous mode [rather to the safe mode], except if it was a shoddy design or a shoddy modification.”

“I think there have been multiple failures here; in software and the absence of interlocking safeguards.” He asks if the guns were given arcs of fire and whether these were enforced with electromechanical end stops. “On a firing range you don't want guns to fire through 360 degrees.”

A one-eighth of a second burst of explosive shells from the barrel of the anti-aircraft gun killed nine soldiers and injured 15 others, MPs heard on Tuesday.

“As they continued firing, after the gun was fixed, it swung completely to the left, and one barrel fired off a burst of 15 to 20 shots in one-eighth of a second. The gun immediately to the left was hit.”

“This fatal burst then killed or injured members of all the guns to the left. The effect was therefore that all of those killed or injured were hit from the right and lost right hands, or right legs, or lost their lives.”

A robot cannon began wildly firing on its own for some reason in South Africa last Friday, killing nine soldiers and wounding 14. The Oerlikon GDF-005 antiaircraft gun suddenly began uncontrollably firing as it swung back and forth, spraying hundreds of high-explosive 35mm cannon shells all over the place. The crazed robot's handlers are still trying to figure out what sort of software bug would cause such mayhem.

Swinging back and forth through 360 degrees, firing hundreds of shells until it ran out of ammo, with software to blame? Or 15-20 shots, to the left, for 0.125 seconds, due to a mechanical failure? I'm glad Gizmodo is on the case.

This incident brought out stories of other rumored berserk robot guns.

The tragedy in South Africa that killed nine soldiers isn't the first time a robotic weapon has spun out of control. Here's a video I obtained a few years back, showing a XM-151 Remote Weapons Station emptying its magazine of .50-caliber bullets -- and then turning towards the camera, looking for new targets to nail. I'm told -- but cannot confirm -- that this footage was shot during a demonstration for VIPs, and that several members of Congress would've been in serious jeopardy, had the weapon not run out of ammo.

My sources tell me that this incident occurred pretty much as described, except that the gun was loaded with blanks.

Rumor has it something similar happened with a SWORDS, and that's why F-M is coming out with a new armed robot platform.

There's an old story about the Sergeant York 40mm DIVAD system to the same effect. They'd programmed the radar to engage Soviet fighters on rocket passes -- a big metal target against a mostly blue sky. But then the Russians started demonstrating helicopter gunships. So they programmed it to pick spinning rotor blades out of ground clutter. Tested it on robot helicopters out in the desert. Worked like a charm.

So they take it out to another test range, one with reviewing stands, for a dog and pony show for the big wigs. And they fire it up, wait for the drone...and the turret swings around, through the reviewing stands, as the bigwigs duck and bail out. And it locks on the exhaust fan spinning on the side of the latrine.

I doubt if this puts a damper on the Military-Industrial-CONGRESSIONAL Complex profiteering with UAVs.

Probably not a good idea to remove the moral inhibition chips...