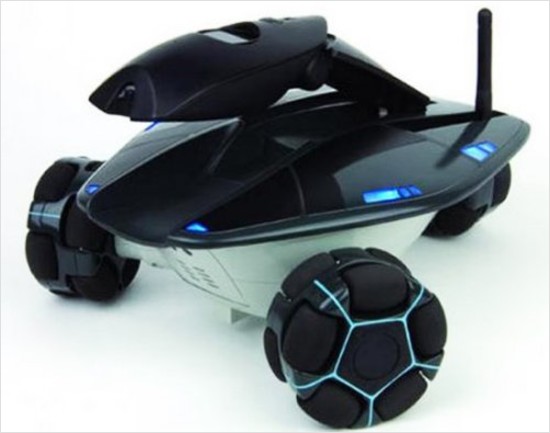 From the Evolution press release:

Las Vegas & Pasadena, Calif. (CES) – January 7, 2008 – Evolution Robotics, Inc. today announced the introduction of a major breakthrough that marks the start of a new era of "super smart" robots for the consumer market. For the first time publicly, the company unveiled its NorthStar 2.0 system, which enables robots to be truly aware of their environment and perform everyday tasks with complete autonomy. The first product to use NorthStar will be WowWee Group Limited's new Rovio™ telepresence robot, which debuts at the Consumer Electronics Show (CES) this week in Las Vegas. WowWee, an Optimal Group company is a leading designer, developer, marketer and distributor of innovative hi-tech consumer robotic and entertainment products.

NorthStar works like a combination GPS, RADAR and autopilot system rolled into one. It's designed to operate in everyday places like a home or office. So instead of showing you what exit to take on the highway, it guides your robot along a route that you establish, i.e. from your living room to a specific location in the kitchen. The system also represents a major breakthrough in price, coming in at 1/100th to 1/1000th the cost of equivalent systems used in research and industrial applications.

“These are aerospace grade technologies being introduced at consumer prices,” said Dr. Paolo Pirjanian, president and CEO of Evolution Robotics. “NorthStar will have a very profound impact on the robotics market, starting with new products in 2008 and rapidly expanding in 2009.”

I wouldn't mind a NorthStar evaluation kit for my blimp bot. And the omniwheel base is pretty sexy.

Engadget has a video:

Mahalo Daily's Veronica Belmont caught up with Davin Sufer, WowWee's CTO, for an up-close look at the new WiFi-enabled Rovio bot -- and it looks pretty sweet. Users control the Rovio through any browser, and the interface includes full-motion video from the built-in camera, which can be aimed up and down to ease navigation.

Gizmodo says it's “Everything the Aibo Should Be”:

WowWee, makers of such fine products as cat-hunting dragonflies, have unveiled a new, fairly badass three-wheeling robot for home use that's not all the different from the specs we've seen in Sony's new rumored AIBO. A webcam-enabled robot featuring a Northstar GPS system, you can spy on anyone in your house from anywhere in the world.

Syncing with your PC via Wi-Fi, WowWee sees users controlling the Rovio through the internet, cellphones, and yes, even game consoles. What's really promising is that instead of just navigating through your hallways via arm-mounted webcam, you can set waypoints (aka bathrooms) within your house and send your evil minion Rovio there with the click of a button.

$299? I'm there! If I didn't already work at home, that'd be great for tormenting playing with the cats while I was away. As it stands, I could totally come up with excuses to use this.

How much does this make my stock worth?