JoAnne and I had dinner at uWink last night. uWink is Nolan Bushnell's new high-tech restaurant concept, where every diner has their own touch screen for ordering food and playing games.

The concept may not be so bad, if your goals include minimizing (almost removing) interaction with waitstaff and adding opportunities to interact with other diners, but wow right now this is a terrible realization of that concept. From the perspective of a customer it was ridiculously terrible. As a software guy, I found it totally entertaining and educational—failure on this scale is compelling. 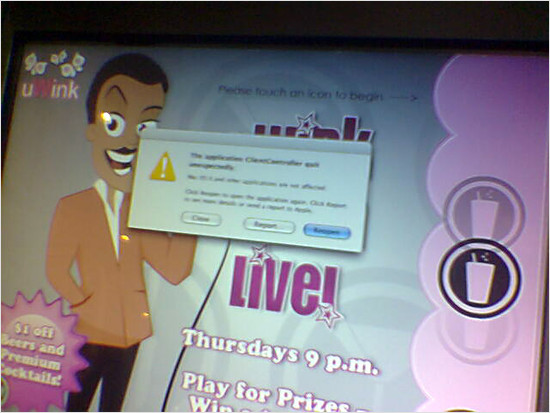 “The application ClientController quit unexpectedly.” Yes, we did send a report to Apple.

When we first walked in, JoAnne asked the host about some tables that looked like they were set up as multi-player LCD projector-based gaming stations. The host said “Oh, those don't work. I don't really know why not.” That could be the restaurant's motto.

Once we were seated, I swiped my driver's license and our waiter/runner helped us login. I entered my name and then JoAnne accidentally skipped past the part where she was supposed to enter her name. There was no going back, so she was “Guest 2” from then on. 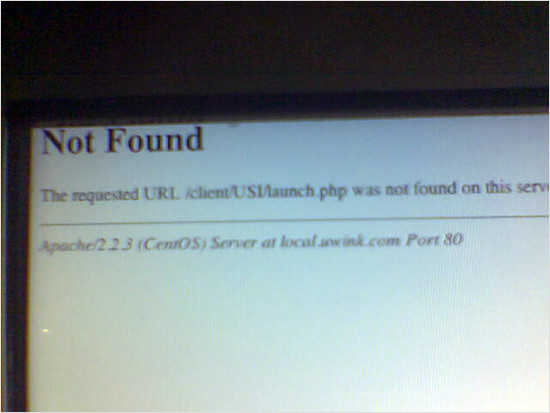 We ordered food and drinks, and the interface was pretty straightforward, but tedious and slow compared to the old fashioned way of ordering.

After submitting our order we got a screen for paying our bill. So we paid it, before we even got our drinks. Then our screen locked up. We flagged someone down and were told that once you pay your bill your session ends, so we should have waited until the end of the meal. This also meant that we lost the game credits from our previous order. The runner reset the thing and we logged in again. This time JoAnne entered her name but I got confused and skipped past my part and so I became Guest 2. I think we both need to sign up for classes at the Learning Center. 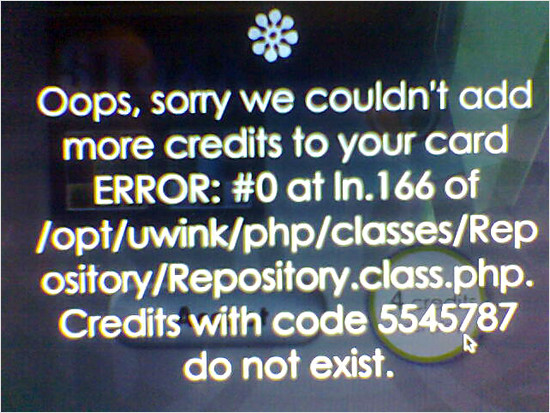 Trying to redeem a non-existent coupon.

About every two minutes a big message would pop up asking if we wanted to join a group game. This was extra distracting when we were busy trying to figure out how to remove something from our order or submit a request for more bbq sauce for my sandwich.

We played a bunch of games, which were mostly kind of pointless or difficult to figure out. There was a Boggle clone that was fun because we played against two other tables (we smoked 'em). 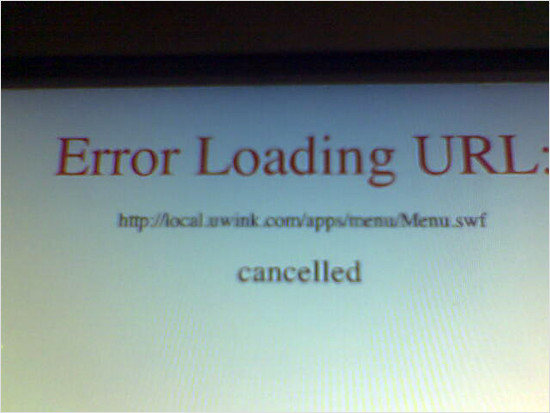 For fun, visit local.uwink.com and check their router settings. Update: It might be down now... intentionally? Who knows. Another update: Oh, this was my mistake. local.uwink.com seems to be an internal address; I probably just saw the router of the cafe I was in.

There were constant crashes, hangs, resets, error messages and console spew. For a while one of the projectors displaying group game info just showed a big 404 error. Two or three times we had to ask a waiter to go in back and reset our station.

If you need a waiter for something, like more salt or bbq sauce, you need to touch the help icon, then select “I need assistance $0.00” or “I need more sugars $0.00” or “I just want someone to explain to me why it costs $0.95 to get my drink up as opposed to on the rocks $0.00” and add it to your order, then submit the order. For real. Only a programmer could come up with an interface like that and then not be ashamed to unleash it on the public. 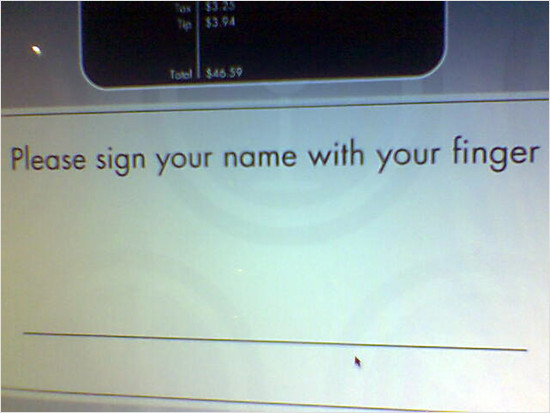 The guy with two kids who sat down at the table behind us gave up and left after 15 minutes. If we didn't find the whole thing so funny we might have done the same.

At a conference last year I heard Bushnell talk about how he wanted robot waiters that could serve your food at uWink. At the time I thought that would be fun and awesome, but I'm having second thoughts today. It's true that the restaurant has only been open for a year, but it's in need of something more profound than a few software tweaks.

Summary: Ambitious idea, less than impressive UI design, terrible execution. Food was eh. Once they get robots, stay away—for your own safety.

I can't wait for the Mt View one to open! You've made it sound like a lot of fun.

That is awesomely sad.

In Tokyo, we went to a place where all your orders happened exactly like that (except it worked). I found the touchscreen setup changes the default restaurant script: it felt natural to order several small things and have them come out one at a time, with no server saying "alright, and what will you have for your entree?". Perhaps that's the intended interaction.

(did uWink want to shoot for the same change?)

Open for a whole year, and still plagued by these basic problems? Wow.

It's been open for a year?! Seriously, how hard would it be to fix that shit? (Perhaps Lemonodor Consulting, LLC should pay a visit.) ;)

Even if the bugs do get fixed, this place misses the mark on why most people go to a restaurant in the first place - convenience. Learning a new user interface (especially a broken one) is far from that.

How was the food?

I've been there a a number of times over the last year and never had any of these problems... sounds like they were having some technical issues, combined with a greasy plate of user error.

Chris: It was OK. not great, not terrible.

Dave: Yeah, it's definitely possible that they had just updated to some new less stable, less tested code or something. And we made lots of errors when using the system--But I think the design definitely encouraged many of those user errors.

You actually paid a tip for having no waiter?

When I said I wanted a restaurant where the server goes down on you, this is not what I had in mind!

My experience with uWink was about the same. I ordered a $14 hamburger and then added $3 fries to it. My daughter (6 years old) had the kids meal Mac-and-cheese for $12. When we asked our waiter for a refill on her milk, we were that they don't "do" refills and that we would have to order another $2. The service was really poor and the canned music was so loud that it made talking across the table imposable. All in all our bill for 2 adults and 2 kids was $78. more like uStink!

So local.uwink.com is currently pointing to 192.168.2.1. Was it pointing to an external IP before?

All this bad coding makes me think SQL injection, PHP file inclusion/eval()/etc and other bugs can't be too hard to find in their apps. Order modification? Credit card theft? Changing people's screens to inappropriate content? I can see it now...

send9: Oh, that's my mistake then. I bet I was just getting the config screen of the router at the cafe I was in.

Maybe successfully ordering food and eating it was the real game...

I'd love to check out one of these restaurants in real life. Where can i visit one?

I'm sorry for the problems you experienced. We are innovating here and Woodland Hills is our test restaurant. While we have been open for a year, we are constantly adding new functionality based on customer feedback. Engineering made some fundamental changes to the restaurant platform this past Wednesday. We changed operating systems and implemented our distribution pipeline in preparation for our additional restaurants. This was a massive shift and unfortunately we had some glitches. We are truly fortunate that most of our customers understand and provide feedback that helps improve our offering. If you are interested in being part of this constructive feedback loop please come back and have dinner on me. Our ability to react quickly and incorporate new ideas is perhaps my favorite part of the project!

The games were "difficult to figure out"??? Come on...6 years olds can play most of the games. Sounds like you may have had an off day yourself. uWink is a fantastic concept & everytime I have been there the food, atmosphere & gaming has been top notch. What I find "difficult to figure out" is how you managed to have a bad experience. For your own sake & that of fun go back....

The games were "difficult to figure out"??? Come on...6 years olds can play most of the games. Sounds like you may have had an off day yourself. uWink is a fantastic concept & everytime I have been there the food, atmosphere & gaming has been top notch. What I find "difficult to figure out" is how you managed to have a bad experience. For your own sake & that of fun go back....

uWink is a dumb name.

Dude, robot waiters are not all they're cracked up to be. I take it you weren't in the LA area at the time of the Two Panda Inn craze? (This would have been the early 80s, so granted, the technology has changed.) The robots had really bad audio components which made it hard to hear the waiter speaking through them, or vice versa (they were basically mobile drive-through-style ordering systems). My mom also got really bad food poisoning there, leading me to think that robots probably have a higher fail rate on their food preparation safety exams than your average person. I'm not being bigoted against robots, I'm just saying is all.

I was going to wonder why electronic restaurants seem to have a higher rate of failure than some other e-projects, and then I remembered a great photostream some friend of mine posted about an in-flight computer entertainment system being tested, with error messages galore... think it might have been Jessamyn of MeFi.