Lemonodor
A mostly Lisp weblog by John Wiseman
Try Lisp, One of These Days 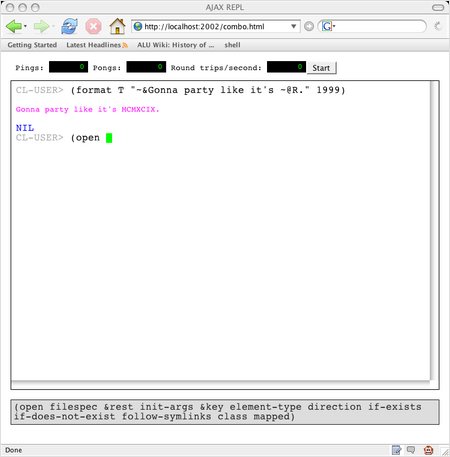 Note the arglist display at the bottom.

This is so cool I could plotz.

Just a warning, the server part of this (in the code mentioned on #lisp is only known to work, at the moment, in fairly recent version of Allegro and the client side has only been tested in fairly recent (i.e. 1.5) versions of Firefox.

Ruby has a flag that makes the run-time not accept certain dangerous operations. Is this awesome thing you have done going to have some kind of sandboxing?

Why are you hurting Lisp, John?

Plotz = Explode in Yiddish, I think.

I tried this thing. It's very slightly interesting, although slow, and a pain in the ass bcs no normal controls work, e.g. can't cut/paste. Ruby looks vaguely like smalltalk, or something, with crapy java-like syntax -- When will people learn that parens and functional programming are the One True Way? ... Okay, the two true ways!

The link is dead and I can't find this - is it hosted anywhere?